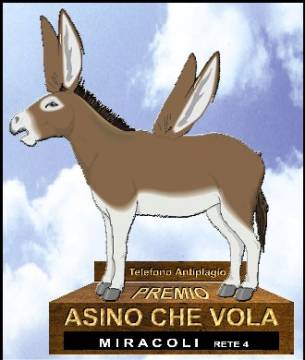 Tomorrow at the Artemio Franchi, Nicholas Frey and the rest of the Mussi Volanti/Flying Donkeys (really, this is what they actually call themselves - please tell me why if you know) of Chievo Verona will be in town to play Fiorentina. A quick glance at the table shows us a couple of things about the Flying Donkeys. First, they have scored the fewest goals in the entire league, and second they are in some serious danger of being relegated. However, their last 5 games include 4 consecutive 1-1 draws and a 1-0 away win. So, that's pretty decent form for them, I suppose.

As for Fiorentina, Prandelli will have hopefully used the last couple of days to try and rebuild the morale from a disappointing 1-0 loss at home to Ajax. Also, hopefully some finishing practice was in the cards as well as our boys continued to be wastefull with their opportunities to score.

Yellow cards are a problem, but I can't seem to get the page to load with the full list of guys who are 1 yellow away from suspension. I do know that it includes Gamberini, Mutu and Montolivo at the very least. So, hold your breath if you see the referee reaching into his pocket tomorrow. The usual suspects are injured and no one is suspended for this match.

I feel like I'll be saying this every week until the end of the season, but this is another massive game for Fiorentina. Plain and simple, this has to be 3 points. A home game against weak opposition means that it is time to be ruthless. Mutu, Gila, Kuz and whoever finds themselves with opportunities in front of goal need to make them count, especially as an early goal would really be demoralizing for the visitors who know how much they struggle to score. Roma and Milan both have home games against beatable opposition, and Genoa has a tough away fixture against Napoli. 3 points are necessary to keep pace and if things break right for us, it could be a step towards consolidating our Champions League place.

I think that the boss will again field a 4-3-3 in the absence of Santana, but there is some scuttlebutt that he will be returning to the 4-3-1-2 once Jorgensen returns from a long injury. Now, I'm a massive fan of Jorgensen and admire his skill and his service to the club, but I'm not entirely convinced that he'll be able to handle the trequartista role at this high of a level after so long out with an injury. Last year he featured primarily as a right back. However, we'll cross that bridge when we come to it.

This would be a perfect game for either Mutu or Gila to remind us why they compose the best striker tandem in the Serie A. Go out and get an early goal boys, the team and the fans could really use it to boost the confidence level.

Unfortunately this game is not on TV here in the USA, so hopefully we can locate some streams to watch the game. Kick-off is at 9:00 am EST on Sunday. I'm going to go with a convincing home win by Fiorentina. Hopefully an early goal will put everyone at ease. Let's say 3-0 with goals by Mutu, Gila and Montolivo. Forza Viola and we'll see everyone back here tomorrow morning to discuss the game.