Share All sharing options for: Ajax 1 – Fiorentina 0: A Few Thoughts

Today in Beautiful Florence a very ugly game of football was played, with the visiting team from Holland eaking out a one-nil win vs. the home side. Since the game was a UEFA Cup match, it is the first leg of a two-legged tie, with the return to be played in a few weeks in Amsterdam. Because of the away-goal rule, we will need a 1-0 lead after 90 minutes to go to extra time, and will otherwise have to score a couple of goals on the road. Yuck. 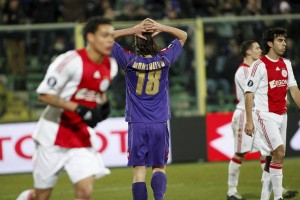 I’m disappointed to report I didn’t get to see the match, so this isn’t really a recap in any real sense. I certainly meant and wanted to see it, but I was just too busy with work. (Damn these matches that happen while I’m at the job!) I did try to have a stream on in the background while I banged away on some other stuff, but it shit the bed on me twice in the early going so I just gave up. Anyway, for a traditional match recap (written by some one who has actually seen the match, presumably) go here.

I wanted to see the match for a number of reasons, aside from my (hopefully) healthy obsession with the Viola. For one, I like Ajax, although I think I may like the Ajax of Brilliant Orange and old football videos featuring Johann Cryuff more than the actual, current Ajax, and for another I actually like the UEFA Cup. I was pretty much a neutral about the competition until last year when, of course, Fiorentina went far. I came to appreciate the knock-out competition and the chance to see the less publicized, but still very strong and hungry, clubs like Ajax or Zenit, or whatever. (Pretty much anyone except Rangers.) So anyway, I was looking forward to this.

I’m not going to sit here and pontificate on a game I didn’t see, but all the match reports I later read suggest that the Viola dominated for long stretches of the first half but simply could not put the ball in the net. The club has had trouble scoring all season (especially in the games played without Mutu, who played today) and it seemed that in this match our weaknesses came home to roost.

In the last few weeks we’ve gotten a few results that maybe we haven’t totally earned. I’m certainly not complaining; sometimes the ball bounces your way and sometimes it doesn’t, but I’ll always take it when it does. But there has been different ways of thinking about these results: on one hand, it has been said (by me, among others) that good teams need to grind out points when they’re not playing their best. So there’s nothing wrong with the last few results. On the other hand, some other people have suggested (including me again, being contradictory) that good teams actually don’t get in that position all that often and only have to grind out points once in a while. So it should be more of a concern.

Well, there is obviously a little something to be concerned about here, because (depending on how you think of it) we’ve played a few less-than-par matches in a row, and today were unable to grind out a win against a team who (from the match reports, at least) seemed inferior to us. It’s something to think about.

Now, do I think we can get a 2-0 win on the return? Most certainly. And by game day I will probably have talked myself into a 5-0 win. But I do hope they stay in the tournament, and show in Amsterdam the heart that was on such obvious display this past weekend.

Tim and I will both be back soon with the coming weekend’s game. Hope you are all well, and Forza Viola!