What the Hell Just Happened?

Share All sharing options for: What the Hell Just Happened? 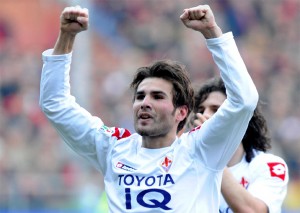 Today in a packed and tense Stadio Ferraris, Fiorentina went down 3-0 to an excellent Genoa squad, before Viola hitman Adi Mutu pulled the club up from its bootstraps with an inspired hat trick (including the third which came, literally, at the last moment of the match) to salvage a point. It was, perhaps, the game of the season in Serie A.

When you blog about a team, you tend to start writing the match reports in your head before the game is even over. Well, believe me, I had this one practically finished when the club went down 3-nill. The first half of the match was, I think, the worst half the team played all year. Among the notes I jotted down:

• Gila wasn’t getting a sniff of the ball, and the few times he did see it, he was offside. I recalled that I wrote in December that he had a shot at 35 goals in all competitions this year. Seems like a long time ago now.

• My precious was the only man running at the defense in the first half, but he was going down way to easy. Yes, he got a man red-carded. But he is better than this. I still cut him a world of slack because of the age.

• Our midfield was atrocious. Monto and Kuz, our young wingers, were supposed to be building blocks of the team for a decade to come. Instead Ricky disappears for 10-15 minutes at a clip and Kuz apparently thinks football goals are awarded by seeing how far you can boot the ball into the crowd. How did our strong point become our weak point in such a hurry?

• Marco Donadel was simply atrocious today. If there was any doubt remaining about whether he should be the starting holding midfielder above Melo, it was erased today. He even earned the dubious distinction of being embarrassingly beaten twice on the same goal (Genoa’s second), a la Terry Butcher during the Maradona goal (the good one) in the ‘86 World Cup.

• The debate continues about Vargas. Me and the apologists think his attacking on the flanks is vital, especially with the weakness of our midfielders. Others doubt his defense. I was more concerned with Comotto, who has been the steal of the season but was exposed more than once today.

• Like everyone else, central defense continues to worry me. Dainelli needs to be replaced next season, but I don’t have handle on Gamberini. Is he slipping, or just always out of position as he covers the sloppy work of others? I feel like it’s the latter, but I’m not quite sure.

All of the worries are redeemed and, to an extent, forgotten by what followed. After going down 3-0 the team responded with the greatest of character, led by their talisman Adrian Mutu, about whom enough simply cannot be said. He is wonderful on the ball, deadly in front of the net, and shares with all of the great strikers, and perhaps all great athletes, a desire to have the ball at the critical moment. After the Viola went down today you could see him literally hollering for the ball, demanding it to be passed to his feet. This is not a characteristic you see from Gila (not his personality) or Jovetic (still too young) but it is not their fault. You either have it or you do not. Once Adrian got two, he wanted the hat trick as much to prove his own greatness as he did to get the point. And that is all to the good. The great players need an immense ego and a greediness for the ball. Mutu proved having that desire paid off in spades for all of us today.

After we were beaten 1-0 by Milan a few weeks ago, I noticed a marked pessimism on the boards. In my write-up, I argued that we played better than the score line showed and had no reason to hang our heads. Well, today everybody is rightfully ecstatic. Today is the type of day sports fans live for, and it should be a day for celebrating. I myself wish I was in Beautiful Florence with my lovely wife and little boy. But let’s not let the fun of this day cloud our judgment; things were not going well for long stretches on the pitch today. We went 1-0 down to an opponent who was then reduced to ten men; we then allowed then to score two more goals. Our midfield play was particularly abysmal and needs to be corrected immediately, or we will soon be bounced from the UEFA Cup and will not get the fourth spot in the league. Everyone here knows I’m no pessimist; but even on the best of days, it is good t be a realist.

Many of you have seen that there was enormous tension during and after game; apparently things were thrown on the field and at the Fiorentina bus as they left the stadium. Sadly, a Genoa fan was hit by the same bus during the violence. That crap is the least likeable aspect of Serie A. Take it from someone who has been at the epicenter of a football riot in Rome. I don’t have any information on the person who was hit, but I hope he’s OK.

With the draw we stay a point in front of Genoa, in fourth. Still in Champions League contention. Now we switch things up again and our next match is a UEFA Cup draw vs. Ajax. I’m excited about the game, but know we’ll have to play a bit better than today to get a result. We’ll, almost everybody. Adi played pretty well today.

I’d also like to re-welcome back Tim to the boards one more time. I think he’s going to do a great job. He also had a fine idea to start a facebook page dedicated to the Viola and the blog. He actually inspired me to get a facebook page. You see, I am Grand Old Man compared to the rest of you (Mid thirties! A mortgage! A kid!) so I had no idea what all this facebook shit is all about. Anyway, I signed up to stay with the times. Anything for a little Viola news, I guess.

So Tim will be back soon with the Ajax preview. I might be back mid-week with a “news and notes” column. In the meantime, enjoy this most special of days. Matches like that don’t come around all that often, and we have a right to celebrate. Forza Viola.