Please allow me to reintroduce myself ... (and Genoa preview)

Share All sharing options for: Please allow me to reintroduce myself ... (and Genoa preview) 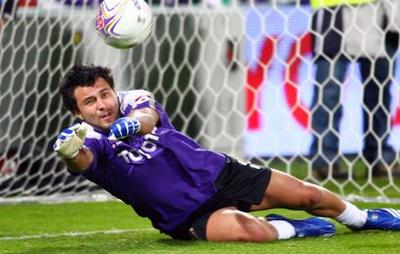 My name is Tim and I'm going to be helping Ted out with this here Viola blog. You may remember me from awhile back as I had the keys to the blog from roughly fall '07 until the start of '08, and I usually post in as "tmc" so you may recognize me from the comments. I live in DC where I am an attorney working for the government. I became a Viola fan in 2000 when I lived in Florence for several months while studying abroad. I've kept up with the team through all of the highs and lows since. I'm excited to be back on board and Ted and I are hoping that 2 bloggers will leave Viola fans with more content to keep up to speed on our favorite team.

In order to facilitate discussion, post suggestions and generally spread the word about our community here, I went ahead an established a group for the site. Plus, there is an email address over there in case you want to get in touch with me. Link

Most importantly, all of the Fiorentina players who suited up for their respective national teams have returned unscathed. In the big fancy friendly at the Emirates in London, Felipe Melo bossed the midfield for Brazil against Italy, and Montolivo and the Gila Monster each contributed little in a lackluster first half for the Azzuri. Lippi promptly yanked both. Kuz played a half in a Serbia victory, and I have no idea whether our boy Kroldrup saw the field for Denmark. The highlight was certainly Melo's strong performance for Brazil in his very first cap, as he certainly made the case for inclusion in Dunga's squad going forward.

After singing his praises above, (and I think there is a strong case to be made for him as Viola player of the season up to this point), Felipe Melo will have to sit out due to accumulated yellow cards. Seriously, the team needs his play-making abilities while Santana is out and he's got to figure out a way to avoid these suspensions. Other Viola injuries include Jorgensen and, apparently, Almiron (not that anyone wants to see him in the game).

A glance at the table shows the vital importance of this match. Genoa have been a strong team this year but are coming off of a 3-0 defeat at the Olimpico against Roma. Diego Milito is the danger man for Genoa, as he is level with the Gila Monster on 14 Serie A goals this season.

Prandelli has some interesting decisions to make without Fiorentina's 2 most consistent creative players this season, Melo and Santana. Donadel will be certain to fill the holding midfield role, and if Prandelli keeps with the 4-3-1-2, then Jo-Jo is the logical choice to start as the trequartista. I think Jo-Jo is better suited to that role than Montolivo at this point, and the other option would be Semioli who I think is better out on the wing or up front.

Considering that a Champions League place is on the line, we can expect a hard-fought game. Both teams could use the 3 points, especially considering Roma's charge up the table. Also, we can keep in mind that the Milan derby means that AC Milan may not increase their total of 45 points so 3 points for Fiorentina would bring the boys to within 1 point. Clearly, a lot is on the line. Expect the Marassi to be rocking.

No U.S. TV for the game, which is at 9 am EST on Sunday. I'm going to predict a 2-1 victory for Fiorentina with the goals by Jo-Jo and the Gila Monster.

Sorry for the epic length of this post, but it is good to be back. Forza Viola and look for Ted to post up a game recap.