Share All sharing options for: Lots on the Line as our least favorite French Guys come to the Franchi 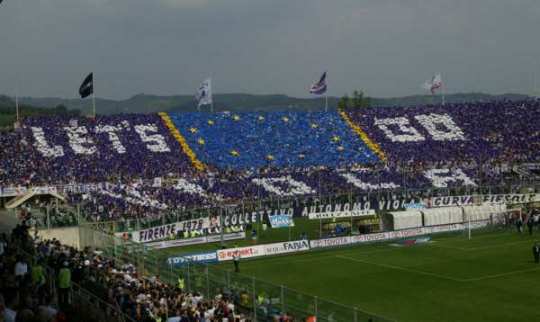 Buon Giorno. I'm nervously watching the clock, waiting for 2:45 EST this afternoon. Quite a bit is on the line for Fiorentina as Lyon come to town. A win punches a purple ticket into the knock-out phase of the CL, and keeps alive the possibility that the Viola can top the group. Also, that would be some sweet revenge against Lyon, who are undefeated in 3 matches against Fiorentina in this competition, despite being clearly outplayed in 2 of those 3 matches (this year and last year in France) in my humble opinion. Let's take a closer look at the challenge for Cesare's boys this evening.

Close followers of Fiorentina (and readers of this here blog) have known for quite awhile now that whatever the stats said before Saturday, the Viola defense was a weak point in the squad. And, good God, Saturday proved that without Gamberini back there anchoring things and plugging holes, Fiorentina are clearly in trouble. Also, I'd say that I have a developing understanding of tactics at this point, but why exactly was it a good idea to play a high defensive line and rely on the offside trap with two of the slowest center backs in the Serie A out there? Um, Parma have young, dynamic forwards. What was going to happen if they sprung the trap? Ok, enough about that match, it was a poor one, and hopefully it can be chalked up to some blown assignments, injuries and general lethargy coming out of the international break.

Fiorentina will still not have a 100% strengh squad tonight. Gamberini, gulp, is out. So is Mutu. Jo-Jo is on the way back to fitness, and will probably make an appearance as a second-half sub. A silver lining is that Kroldrup is back. That's what we're reduced to a CB, but clearly a CL match against Lyon is beyond Natali who is only able to win headers if it requires jumping straight up into the air when he's already in the right position. Staying in front of someone, tracking a run or defending a guy who is facing him with the ball at his feet are things he cannot do at this level.

For me, this means two things. First, RickyMonty and Zanetti are going to have to do a good job of retaining possession in the middle of the field. And second, the wingers are going to have to do more of a 2-way job of defending. Marchionni and Vargas are going to have to be conservative with their runs forward, and the shape of the team will probably need to look more like a 4-5-1 than a 4-3-3 if the Viola are going to keep Lyon's goals to a minimum. This might be a game where Fiorentina look to keep it tight and hope the Gila Monster can come up with something on a cross, or maybe a late bit of magic from Jo-Jo running at a tired defense will do the trick.

Lyon haven't been playing particularly well of late. Their last five matches, going back, are draws with Grenoble, Marseille (5-5 !), and the Scousers. Before that, they lost to St. Etienne and Nice. Another draw tonight suits them just fine as it will keep them in first place in the group and ensure that they finish ahead of the Scousers. But, they've got the type of tricky and pacy forwards that will surely provide options going forward in Gomis, Pjanic and Lopez.

Fiorentina: 4-3-3 masquerading as a 4-5-1: Bassy; Comotto, Dainelli, Kroldrup, Gobbi; RickyMonty, Zanetti; Marchionni, Old Man Jorgensen (I don't want to see Santana and the old man has had a post-international duty rest and his experience would be great today), Vargas; Gila Monster.

French Guys: 11 guys I don't like, probably including that cheating flopper with excessive syllables in his name Toulalan, the guy who's not a better French goalkeeper than Bassy but has a tough-sounding first name, and a few forwards who are significantly faster than any of the Viola defenders. We'll see in a couple hours.

Its going to be live from 2:30 pm on FSC negli Statti Uniti. We'll exchance some streams in case people don't have the channel or won't be able to wait until they get home from work (like me).

I'm going to say the Viola keep things tight and win it late with a 88th minute goal by substitute Jo-Jo (he comes on for Old Man Jorgensen somewhere around the 60th minute). 1-0 to the good guys and the Scousers go to whatever they call the UEFA Cup now.