The Viola are Back! Newcastle Preview

Share All sharing options for: The Viola are Back! Newcastle Preview 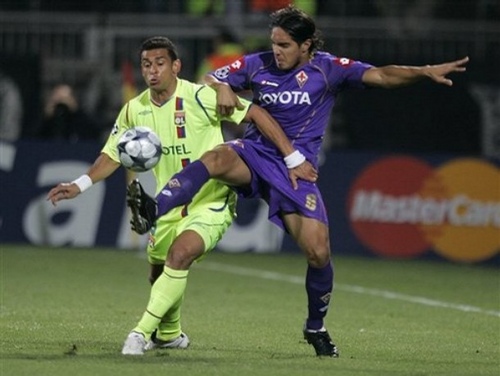 Finally! This goes two ways I suppose, the good is finally the Viola are returning to action after the international break that would not end, and the bad is that finally the viola blog has been updated. I'd make excuses, but let's just get to the calcio.

1) The obvious place to start is the rivalry, ignited by the sale of Baggio in 1990 and renewed a bit this summer when Melo decided to cash in by moving to the Viola's most hated rival.

2) Prandelli of course is a former Juventus player, and that Football Italia preview lazily speculates that he could be in line for the Juve coaching gig if Ciro Ferrara doesn't quickly get it together. Of course, the fact that Prandelli has repeatedly pledged his loyalty to the Viola and clearly wants to continue with this project doesn't really count for anything.

3) Melo. It'll be his first game against his former team, and we all know he's card-prone and has temper issues. I'll be watching to see how he keeps his focus, in light of the fact that he has made a couple of very bad errors this season. Also, Momo Sissoko is apparently ready to go tomorrow, so it'll be interesting how Juve will set up to get these two destroyer-types out on the pitch at the same time.

4) Marco Marchionni and Cristiano Zanetti will be going up against their former team as well. I'm lukewarm on Marchionni at best and certainly unsure as to whether he's a part of Cesare's best 11 at this point. Zanetti has been excellent so far this season and will be motivated to show that he still has plenty to give, regardless of what Ferrara thinks.

5) And, oh yeah, both teams are level on 14 points, two behind league leaders Samp and Inter.

I'm going to keep this short - Gila Monster was awesome for Italy, scoring a late equalizer in Dublin to secure a trip to South Africa and then a late hat-trick to save face against some other country Italy should have beat at home. Vargas was tremendous for Peru against Argentina in that monsoon in Buenos Aires. He set up Peru's goal with a RIGHT-footed cross, and audaciously tried a shot from the center circle that went off of the crossbar after Palermo's injury-time winner. Old Man Jorgensen played a bit for Denmark but neither he nor Kroldrup are making the trip to Torino. Mutu's fallen out of favor with the Romanian federation. I can't really be bothered to care why (something about going to a club I think), but I am happy that he's not going to be playing for them for a little while because that will mean he'll hopefully be able to focus on staying fit and being ready for Fiorentina.

Fiorentina: Here are the guys making the trip: Avramov, Castillo, Comotto, Dainelli, De Silvestri, Donadel, Frey, Gamberini, Gilardino, Gobbi, Jovetic, Marchionni, Montolivo, Mutu, Natali, Pasqual, Santana, Seculin, Vargas e Zanetti. I think its time for Cesare to play all 3 of Jo-Jo, Mutu and Gila Monster from the start. So that means maybe tomorrow the game will begin with more of a 4-3-1-2. I think that at least 1 of those guys (Mutu and maybe Gila) won't have 90 minutes in him, so Marchionni will come on and the tactical set up will switch to the 4-2-3-1.

Newcastle: 11 guys in prison uniforms, likely including a guy who was once the best goalkeeper in the world, a washed up golden-ball winning center back, an overrated hack of a center back with a massive nose, a left wing back who was no longer good enough for the French league, a crazy Brazilian who will absolutely get at least 1 yellow card in the game (but I still wish was on our team), a gangly Malian midfielder who will pass more to guys in purple shirts than guys in prison uniforms, an Argentinian who probably still doesn't know the words to the Italian national anthem, a diminuative Brazilan who scares me to death, and up front there will be an aging French poacher.

The match starts at high noon, EST and will be televised live on FSC. Also, I cannot wait.

Newcastle are going down. Neither of these teams have scored many goals this year in Serie A, so I'm going with 1-0 to the visitors. Bassy has a huge game and the Gila Monster finishes off a cross from Vargas.

Forza Viola! The above was in good fun, forthcoming Newcastle trolls. Is it tomorrow at noon yet?