Wait…What the Hell?...Fiorentina is Playing this Weekend?!? (The Fiorentina v. Leece Preview)

Share All sharing options for: Wait…What the Hell?...Fiorentina is Playing this Weekend?!? (The Fiorentina v. Leece Preview) 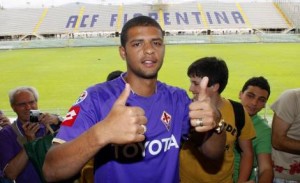 All over Italy (and in a few other places around the world) children of all ages will be waking up on Sunday with joy in their hearts, looking longingly towards the can’t-come-soon-enough afternoon. No, they are not thinking of world peace or a new order of brotherhood and justice in our imperfect world; they are just thinking about Fiorentina, because Series A finally gets going again this weekend.

Others might disagree about what the “premier” game will be on the peninsula this weekend (the media will surely say it is Roma v. the Beckhams) but for our money there is no bigger match than Fiorentina v. Leece, because it means our team is back on the pitch again.

When we last left our club, they were on quite a high. They had won three in a row, including against some “not to be sniffed at” opponents, and although they had been bounced from the Champions League hope are high about an extended run in the “more fun anyway” UEFA Cup. Fiorentina currently sit fourth in the Series A standings, just a point behind the Beckhams.

Our erstwhile opponents this week, the newly promoted Lecce, sit at a more modest 18th. Lecce have only won two matches so far all term, but they have played to some impressive draws, including tying Milan 1-1 before the latter club changed it’s name to the Beckhams in honor of its greatest-ever player.

Most Viola fans consider this a must-win match for Fiorentina. Here are a few reasons why.

1). The game is being played in Beautiful Florence. Fiorentina are strong at home. Leece have not yet won on the road.
2). They need to win this one as their next few games are, uh, tricky, to put it mildly. First they have the Beckhams, then Juve, then Napoli. Why do I have a feeling I’ll get to see the match vs. the Beckhams on live TV?
3). Because they are better than Lecce.

So I am expecting a Viola win. Big surprise there. But I am now a touch worried about the next few weeks.

Recent Form (well, recent being “before Christmas” but still):

Right now only Jorgensen is being reported injured for the Viola. My man Monto is out on suspension, so maybe we see a bit more of a defensive midfield. Or maybe the Great Man slides Jovetic in there and pushes Santana back where he belongs in the midfield. That would make me happy…

Viola win 2-0 in one of those matches they could have won 5-0 with the breaks. Gila gets the first and Mutu gets the second on a penalty around the 65th minute. Talk about your bold predictions!

The game is apparently not being shown here in the states. Damn you all. Damn you all to hell, TV decision-making people.

I know its already mid-January, but could you, my friends, allow me one last Christmas wish? For I wish that David Beckham makes it through his match with Roma in perfectly fine shape, free of injury. That way Felipe can cream him the following week with a studs-up tackle. I’ll gladly take the red card; Christ, I’d be on the computer so fast ordering a Melo shirt it would make your head spin.

That’s it for now. I hope you are all well and enjoying the new year. I’ll be back after the match with the recap. Forza Viola, everyone!