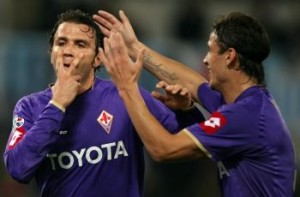 Hey everybody. Hope you all had a wonderful holiday season. I sure did. I spent a ton of time with my family, especially the first Christmas with my seven-month old son. Santa even left me a brand-new 08-09 Fiorentina shit under the tree, complete with a Champions League patch, to commemorate the very special season we’ve had so far. Well, it was either Santa or my wicked cool wife. Whatever.

The only thing missing from this near-perfect holiday season was a little football. To be honest, I haven’t seen a black-and-white ball kicked in anger since the end of Fiorentina’s last match. I have no interest in watching some crap match from the prem or la liga. I am jonesing for some Calcio, and I will patiently wait until the Viola’s next match to get some.

So, what’s been going on while I’ve been on my vacation? Not much, really, since the boys are on vacation too. Well, not exactly, they are in Spain training, which means they are hard at work practicing, improving team sprit, and otherwise preparing for the second half of the season.

But of course, this is the silly season, the January transfer window, so of course the rumors are going fast and furious. Here is what has come out in the last few weeks:

• My man Giampaolo Pazzini, who basically can’t break into the starting eleven at Fiorentina, is now the most wanted man in World Soccer. Every single club in Europe, as well as all the teams in the J-League, the MLS, and my high school soccer team are on the verge of signing him. Fiorentina will receive somewhere between a plug nickel and $100,000,000 in return for selling him.

• Fiorentina are also about to sell Osvaldo, Pasqual, Da Costa, Gila, and the Batistuta statue.

• On a more positive note, Fiorentina are about to sign six more 13-year-old midfielders who I’ve never heard of but who will all be the World Player of the year in seven years. Apparently in a remarkable seven-way tie.

• In general Calcio news, Juve is about to sell Buffon, so they can buy Messi. Meanwhile, Barca will use the Messi money to get in on the Pazzini biding.

So anyway, it’s good to be back in the crazy world of Italian football. I missed you guys. If you have any transfer rumors (real or made up, they’re all pretty much the same) then leave it here; in the meantime, if anything actually HAPPENS on the transfer market, I will write it up as soon as I hear about it. Meanwhile, we will start looking forward to the tough start to the second half of the season we are facing soon.

Again, happy holidays to all of you. I hope everyone is well.