Share All sharing options for: Fiorentina 2 – Napoli 1: Recap and Notes 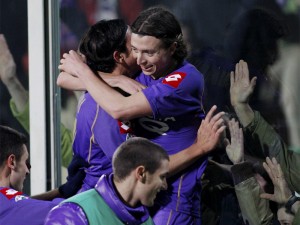 Yesterday in Beautiful Florence the Viola defeated Napoli 2-1 in a closely fought contest. Mario Santana got the first right after the break (huh; go figure) and Ricky Montolivo got the winner with about eleven minutes to go. Both goals were impressive. The Napoli goal went in due to a flukey mistake by Bassey Frey, for which he is instantaneously forgiven due to his general awesomeness. We shall never speak of it again.

I did not see a moment of the game live, and thus can’t say too much about it. (I was in meetings all day yesterday, and since the match wasn’t on TV I couldn’t DVR it.) By all accounts Fiorentina played lively, dominated possession, and had plenty of shots. Aside from the two goals the boys apparently still had a bit of trouble in the box. Irregardless, I will gladly take the win (the first of 2009) and move on. A decent-enough set of highlights of the match can be found here.

Fiorentina now sit alone in sixth place, a point behind Roma and two behind Genoa. We are now through that “killer” part of our schedule, although we don’t really have any softies coming up, in my opinion. We next have Bologna on the road (on Sunday) followed by Lazio at home and Genoa on their ground. If we are serious about finishing in the top four we need to build up some points in this stretch regardless of the fact that some of these teams we are playing are pretty damn good.

The other news bopping around this week is related to the end of the January transfer window.

First, the Ivanovic deal is still unclear. I would like it to happen, but we’ll see. Here’s the latest ‘report.’

Here’s some news of da Costa going to Samp, apparently so Pazzini can have a wingman when he’s picking up girls.

And here are some general rumors about us selling. This one has Donadel going to Newcastle (the real one) and Pasqual going to Naples. I’m not seeing it.

Finally, two last bits of news. First, here is a report that poor old Gila is being extorted, which apparently has nothing to do with his recent goal drought. The second is an essay on Fiorentina’s youth policy, which I include for your interest and reaction.

Hope all is well. Forza Viola, everybody.