Fiorentina 2 – Juventus 1 (If the Match Had Been Called Honestly)

Share All sharing options for: Fiorentina 2 – Juventus 1 (If the Match Had Been Called Honestly) 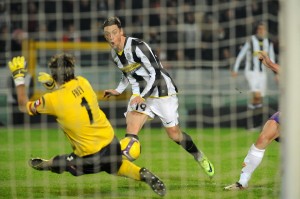 Well, the fix was in.

During the midweek I wrote about and linked to the growing suspicions among the Viola brass that they were just not getting the calls this season. That wariness was proved right this Saturday when one perfectly good Gila goal was ruled offside and a clear penalty against My Precious was ignored by the referee. When we gave up a tough goal off a sweet feed by Del Piero, I knew we wouldn’t get one back; even if Frey had kicked it in from his own six yard box, it would have been called offside. In the end, Those Who Decide These Things (formerly known as Luciano Moggi) decided that the Viola simply could not win two years in a row in Turin. So, of course, they did not.

I watched a bit of Milan today, and watched two penalties called that were both less clear cut than the one ignored against Jovetic. As one poster to the board said earlier, Kaka gets the calls when someone breaths on him wrong or looks at him funny. But obviously Fiorentina has fallen out of favor this season. Something happened, someone got pissed off, or somebody decided that we shouldn’t finish in the top four this season. So we probably won’t. Welcome to Italian football everybody. If you’re a newcomer to the sport, get used to it. Italian football is the most beautiful, complex version of the sport played anywhere in the world. It is also the most crooked, and it looks like we drew the short end of the stick this season. Juventus, as they always do, will continue to get the calls.

Aside from the fact that the match was fixed, many Viola fans were down about the play of the boys. I disagree. I think they played pretty well. And think about it this way: I watched Milan destroy Bologna today, but we kept the score to 1-0 last week even though we weren’t getting the calls. This week we played in a match fixed beforehand but still kept it to 1-0. Juve and Milan are both good teams even when they don’t cheat, so I don’t think we should hang our heads. And in retrospect, it was impossible to win Saturday’s game; the referees would not have allowed it. So we did all right.

Gila did OK up front and had a perfectly good goal taken away. Jovetic was good for long stretches and created a goal from the penalty that the refs ignored. Melo was tough and strong in midfield. I like Pasqual on the wing and thought Gamberini did a good job at centerback, especially as he was playing both centerback positions. (More on that in a moment.) Frey was God-like and could do nothing about the goal.

I want to take back what I took back last week when I said Santana was playing better. Ugh. I should have trusted my first instinct. As soon as Mutu’s owies get better we slide him into the front and push My Precious back into the hole where he belongs. Santana can fight for a spot in midfield with Kuz and Gobbi.

Speaking of which, Kuz, Gobbi, and Monto were very quiet in the midfield. What the fuck is going on with Montolivo? Are we going to put up with this “great one match, invisible the next” shit for the rest of our lives? Show some consistency, man.

The real ugliness of all of this is that it really doesn’t matter one way or the other. We lost because somebody in a suit decided we should lose. If you haven’t figured it out yet, I am really, really, fucking pissed and have been ever since about five minutes into the match. Just when you think Italian football is on the way to cleaning itself up and being respectable, this shit starts happening again. It drives me nuts. I love Fiorentina with a passion, and love everything about the club, but I hate how fucking dirty the sport is in Italy.

Hey, I live in Boston, Massachusetts, USA. I don’t have to be a fan of Fiorentina. I can’t get to Florence NEARLY as much as I would like, and have to do all sorts of pain-in-the-ass things like get up early on a Sunday morning to watch the games on a grainy computer feed. It would be a hell of a lot easier to just be a fan of the Boston Red Sox, the Celtics, or even the New England Revolution. In fact, I am a season ticket-holder to the Revs and live a few miles from the stadium. But at heart I am a Viola fan simply because that is the team I love. Every time I see this shit, however, every time I see something crooked going on in Series A, it makes me love the sport just a little less.

We’ve got Napoli at home on Wednesday. We’ll see what happens. We’ll see if we even get a chance to win.

Also, sorry to apparently throw everyone off with my little Newcastle joke in the preview. (Well, everyone except Johonna, who did get it and had to explain it to everyone else). Please rest assured that I do actually know a tiny bit about Italian football and am well aware that Newcastle isn’t in Series A. I’ll try to keep things joke-free in the future, so as to not to confuse any of my readers. If I stay in the mood I’m in right now, it won’t be too hard to keep from making jokes.