Was Lecce the Shipwreck of our Hopes?

Share All sharing options for: Was Lecce the Shipwreck of our Hopes? 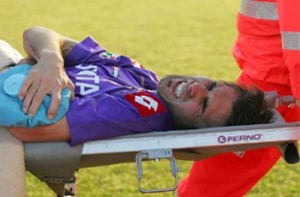 Today in beautiful Florence the Viola were defeated 2-1 by recently promoted Lecce, throwing the remainder of our season in doubt and leaving the club struggling for answers. Among the bad stuff that happened today:

• We got beat by an inferior team in a “must win” game at home and now face three very tough matches coming up.

• Star man Adi Mutu dislocated his elbow and could be out for a month. This is not as bad as many of us feared when we saw the injury live, as many thought he broke his arm and was done for the season. Still, it is never good to lose Adi.

• Also, Bassy grew a full beard, and now looks more grizzled and less weird. I think he looks better in the beard, frankly, but I don’t think it’s a good look for our preternaturally talented goalkeeper, if that makes sense. A grizzly beard like Frey’s belongs on a veteran catcher on a baseball team, someone who hits .250 but gets the crucial RBI when you need them. Frey is more of the eccentric genius and needs a haircut to demonstrate it. Go back to the ‘burns, Bassy!

• Village Idiot Pablo Osvaldo picked up a pointless red in the dying minutes. Not only did this ensure he would miss the game vs. the Beckhams (he would have perhaps started since Mutu is injured) but maybe messes up a potential Pazzini sale because now we need some warm bodies to start in the forward line along with Gila. I’ve been on the fence about this one, but this morning put me firmly in the “sell Osvaldo” camp. As far as I’m concerned, the bicycle kick was a hundred years ago. And get a new headband, moron.

So what about today’s game? In terms of the action on the field, I’m not actually as down about it as some of the gang that watched the match and commented on the boards. (And thanks to everyone who participated, by the way.) Here’s what I saw:

I actually thought Fiorentina played a pretty decent game. Yes, they were caught twice on the trap, and they were harshly punished for it both times. The team was coming back from a longish break and was rusty. But I think any errors today were actually tactical, and thus my beloved hero The Great Man is at least partially to blame. Let me explain.

As everyone knows Monto was out on suspension, so Prands started a defensive-looking midfield of Kuz, Melo, and Donadel. Santana (who played well today but missed another sitter) played deep and could be considered a fourth midfielder, or perhaps could be thought of as playing in the hole. Fine. Prands also started with a strait back four (although Vargas moved forward a LOT, which was a good sign) and Mutu and Gila up top. I thought this lineup was the best he could do with Monto out and certainly expected to have no problems on defense with Melo and Donadel holding.

But I think that Prandelli went into this perhaps a little bit overconfident. Understandably, however, but still overconfident. He needed the win, was playing at home, and was playing a weaker team. So instead of playing Melo and Donadel in the holding role, he played Donadel back there alone and used Melo as another attacking mid, feeding Santana, Kuz, and Mutu (before he went out.) That only left Donadel in a holding role, which would normally be okay, but Prands also had the back four play very, very high. At times it seemed as if the four of them (three when Vargas was marauding around) were almost parked at the midline.

This wasn’t a crazy plan. After all, Fiorentina dominated possession, corners, and shots. But it required timing, panache, and discipline by the back line, and after they gave up the first they had to throw men forward while Lecce could hold players back. The second probably sealed the deal, and we were done. But I at least see where Prandelli was coming from. I guess what I’m saying is that I certainly acknowledge that we were beat today, and hats off to Lecce and all that, but I don’t think the performance on the field is as bad as some thought it was.

But onto the question I asked in the title: was this match the shipwreck of our hopes? Can we now finish in a CL spot? Obviously the next few weeks will tell its tale. We’re down to sixth, sitting behind some very good teams, and have to play for a while without Mutu, maybe without Bassy, and perhaps our transfer plans are all messed up because Osvaldo left his brains in his other pair of pants.

Right now my very qualified answer is “not necessarily.” Even without Adi I think we have a shot to beat the Beckhams next week, even if their club features the single greatest player ever to put on a pair of boots, along with Pato, Kaka, Ronaldinho, and Maldini. After that things get a bit more tricky, but Series A is a tough league. That’s why we love it, and that’s what makes us so damn happy when our beloved Viola succeeds. Even if it didn’t happen today.