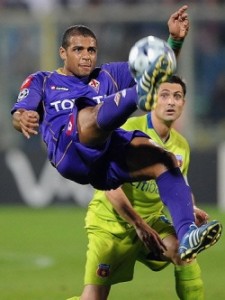 The scoring woes continued for the Viola today as Fiorentina drew 0-0 at home with Steaua Bucharest to take only a point from what was surely their most winnable Champions League game of the group stage. While a point is always surely better than nothing, it could certainly be argued that things now look grim for our chances of advancing to the knockout stage.

Here’s where we now stand in the group: Bayern has four points (they drew with Lyon today) while the Viola and Lyon each have two and Steaua has one. So, in that most obvious sense, we are still in this thing; we are far from eliminated. But we must also be careful not to whitewash what happened today; we dropped two points. Steaua is certainly no walkover (no one in the Champions League is) but they are as beatable a team as we are going to find at this level. Last week, before the Lazio game, I insisted that Lazio were the type of team Fiorentina had to beat, even on the road, to be considered the elite of Series A. They couldn’t do it. Today they had to beat Steaua, at home, if they hoped to advance in Champions League football, and they could not do that either. Like I said, there is always time to get their act together, but if they can’t get a goal off Steaua at home, they are going to find playing Bayern in Munich considerably more difficult.

As for today’s match, I can’t say too much about it as I watched it at work and was interrupted (justifiably) by co-workers a number of times. I was impressed by the team’s possession and midfield passing, and I thought that this was the club’s best defensive performance of the year, equaling their work on Saturday vs. Genoa. (Although I concede that Steaua only looked dangerous to me when they were on the counter.) I also liked the hustle up front, and Adi Mutu looked to me like he was really working to get a goal, but the finishing was simply not there. As many hackneyed commentators before me have said: scoring goals is why we play the game. If Fiorentina can’t get the ball in the net it makes little difference how they otherwise play.

I don’t want to finish this on an overly-pessimistic note. As I said, the club can still be fine. If we beat Lyon at home, maybe beat Steaua on the road and perhaps get some points of Bayern somewhere, we will be OK. I think they can do it, but it just seems like an increasingly tall order when they can’t win the matches they’re supposed to. But that, in the end, is why we support, and love, Fiorentina. Because they always have the ability to surprise us.

Right before I posted this, a report was released that said the Great Man has criticized the fans at the Artemio Franchi for booing and whistling the Viola off the pitch after the draw. I personally never boo the teams I root for, but understand that many people too. Interested to hear your reaction to that below. Should you boo your own club? Did the Viola deserve to get booed today? Was Prandelli right to criticize the fans?