Fiorentina 1 – Genoa 0: In God, Gila, and Bassy I Trust (Bassy Probably More So than the Other Two)

Share All sharing options for: Fiorentina 1 – Genoa 0: In God, Gila, and Bassy I Trust (Bassy Probably More So than the Other Two) 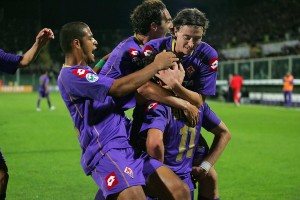 Today in Beautiful Florence the Viola won their second game of the season by defeating Genoa 1-0 on a fine strike by the prolific Alberto Gilardino. Fiorentina are now on seven points and back in the top half of the table with most of this weekend’s games still to play. While there are still many, many concerns to be addressed with the club, (including the fact that all of their points have been won at home) it is nice to be back to our winning ways. I’ll happily take the three points and move on.

There are a couple of ways to view the win. One approach would be to continue to be discouraged by some of the play; the team did not create many quality chances and won only 1-0 vs. a team many predicted before the season would be fighting to stay up. Another approach would be to acknowledge that Genoa is a tough, fighting team that has played very well on the road and can give anyone a run for their money. If the wins vs. Milan and Roma didn’t convince me, today did: I think Genoa is for real so put me firmly in the later camp.

Fiorentina started the game brightly and had a shot on goal within three minutes. Monto had created the opportunity (a corner) and was very strong the whole game. (Hopefully we are beginning to see a trend this season, as he was a lone bright spot in the Lazio match.) Donadel and Mutu have other chances as the first half went on, but Genoa’s defense was sharp. Fortunately, so was the Viola’s. The Great Man decided not to start Vargas and Gamberini, a gamble that certainly paid off with a clean sheet. We shall see what he does on Tuesday. Anyway, the teams go into the half drawn at nil.

Milito comes on for Genoa in the second. Strange that he doesn’t start. In the 54th minute he makes a brilliant run at goal and gets the ball at his feet. His shot is strong but it is almost miraculously saved by Bassy Frey; the announcers calling the game don’t make enough out of it, as it was a gorgeous, incredible save. Thank you Bassy.

Finally in the 61st Gila get a nothing ball at his feet in the box, turns to his right and somehow lasers the ball into the far corner. Industrious boy, that Gila. A hell of a goalscorer. AND quite a bargain on the transfer market, I’d say. Somewhere a douche named Gattuso is grimacing.

However, so was I. The Viola had 30 minutes of defending against a pretty good team ahead of them, and holding onto leads has not been the club’s specialty as of late. The final half hour is a tense affair with a ton of yellow cards without ever becoming really dirty. The Viola do a good job, generally, of keeping Genoa out of the box and truly dangerous attacks are quite limited. The one moment that had me swallowing my heart came three minutes into extra time when Genoa’s Juric crossed a perfect ball into the Viola box heading strait for Olivera’s head and then the back of the net. But Bassy gets out in time and punches it away, so game over. That’s twice he saved us.

So, as I said, it was a win, and against a pretty good club. I would really like to see more of the fluid, attacking style that we fell in love with last year, and I would like to see someone else put it in the back of the net beside Gila. (Although Gila is still welcomed to score as much as he wants.) The defense bended but did not break today, so I am satisfied. If we can do the same vs. a Champions League caliber team on Tuesday, I will be even happier.

On that note, I will be back soon to preview Tuesday’s game vs. Steaua. Hope you all have a good weekend, although seeing our boys get their three must surely be the highlight. Take care, and Forza Viola!