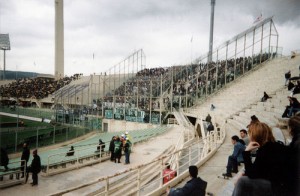 Due to being a bit swamped at the real job today I just wanted to throw up a quick little preview of tomorrow’s (and don’t forget it’s a Saturday game, people) match. The eyes of many fans around the world will surely be on Milan and their derby this weekend, but we could never turn away from happenings in the most beautiful city in the world. Here’s the skinny on what you absolutely, positively, must know heading into tomorrow’s match:

• The Viola were spanked hard by Lazio during the mid-week, and both team President Diego Della Valle and the Great Man were embarrassed and more than a little angry. We shall see how the squad responds. I am hoping it is with about five goals.

• Genoa, meanwhile, have been awfully impressive this season. They have already thumped Roma and Milan and would love to add Fiorentina to their list.

• However, Fiorentina has 4 points this season, and they were all won at home. In a related note, we are at home tomorrow.

• The other relevant fact is that Fiorentina has a Champions League clash on Tuesday, their third match in seven days. Who will they rest? Who will they start? I this point my blind guesses are more blind than usual…

• In other news, Milan dufus Rino Gattuso has nasty things to say about Fiorentina in general and Gila in particular. Guess what, chump? Your 15 minutes are about up anyway.

The Game will be aired live here in the states on both RAI International and FSC. And there was much rejoicing.

I’ve been particularly bad at it this season, so you know how much this is worth, but I still like the character of this team and think they will respond well to the walloping they took vs. Lazio. I see the Viola coming out 3-0 winners.

Forza Viola, everyone. I will be back sometime during the weekend with a recap.