Firenze, We Have A Problem

Share All sharing options for: Firenze, We Have A Problem 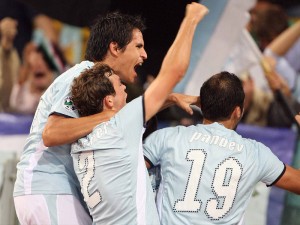 Today in Rome Fiorentina were absolutely shellacked by a Lazio team that pretty much played the Viola off the pitch. It was an ugly, ugly game for Fiorentina fans (it must have been like New Year’s Eve for the Romans) and one that leaves us hoping the Great Man can get the team’s shit together going into the weekend and for next week’s Champions League tie.

The first half was bad, but not terrible. (I took detailed notes on the game until the 31st minute, when my four-month-old son came home from his Grandma’s; I elected to skip the notes and bounce him on my lap for the rest of the game, a decision I was happy I made.) It felt like one of those games where your club was definitely getting outplayed, but things were not necessarily going your opponent’s way. They had blown some good chances and Bassy Frey had made some very good saves. I was hoping that Prandelli would get things together at halftime and that the team would come out more in control and aggressive in the second half. That, of course, did not happen.

Three goals were scored in about an eight minute period starting around the 51st minute, by Mauri, Pandev, and Siviglia. As it is often said in football blowouts, it could have easily been 5 or 6. This was one of those games where, noticed or not, Frey again proved his worth; he made two or three GREAT saves.

But make no mistake about it; Fiorentina were anemic on offense and had no answers for Lazio on the defensive end. Here are some questions I had as I sat and watched the blowout:

1). It’s only been four league games, but is the team already getting too dependent on Gila? Only Monto seemed to show any creativity to me today. (Which was nice to see.) Everyone else just seemed to want to dump the ball into the box and let Gila do his thing. What happened to last year’s creativity?

2). Why was Kuzmanovic playing so far forward? I like him playing further back in midfield, say with Montolivo, but up front he was ineffective. I think the Great Man was right to pull Santana, who has also not impressed recently, but I would much rather see Jovetic, Osvaldo, or Pazzini up front with Mutu and Gila.

3). Speaking of which, Mutu was awfully quiet today, no?

4). Did Almiron have a hand in allowing all three Lazio goals, or was it just me? I’m not sure how long we want that experiment to go on.

5). I like Vargas and am confident that he is going to come good in the long run. But he plays a bit like the great Dani Alves for Barca; he is an attacking force from the back, so you need to have superior defensive cover to let him do his work. That cover was not provided today, and the center backs in particular need to play with more steel if Vargas is going to continue to make those runs, which will eventually cause great havoc.

So, what do we ultimately make of today? It certainly isn’t “dropped points” in the traditional sense, since Lazio is obviously a good team and was playing at home. But most of the contenders for the Champions League spots (‘cept Roma) won today, while we didn’t get a point. Prandelli’s challenge from Tuesday still stands: If the Viola are going to be a big team in Italy, and yes, even in Europe, they need to start beating good teams on the road. We utterly failed today.

Fiorentina have three strait winnable league games coming up, as well as a Champions League game vs. Steaua. Four wins would be just what the doctor ordered. Anything less and we will need to start asking more serious questions about our favorite team.