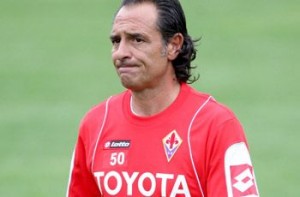 Tomorrow in the Eternal City Fiorentina will play the first mid-week league game of the season as they take on Lazio, who have spent much of the young season looking good and topping the table, in spite of a nasty loss to Milan on Sunday. Lazio looks strong this season, and thus the Viola will have their hands full if they hope to escape the Olimpico with some points.

Meanwhile, Fiorentina has had a pretty good week. Last Wednesday they drew formidable Lyon on their ground to take a point on the road in their first Champions League group stage match. They followed that with a workmanlike win on Sunday vs. Bologna, a win made more impressive by the fact that they were able to rest some of their key men.

So onto Lazio, which is always a tough place for Fiorentina to play. The team has a relatively healthy squad to throw against their opponents, but they also have a bit of much-needed pressure added by their boss. The Great Man has come out and said that this is exactly the kind of game Fiorentina will need to start winning if they are to be considered one of the premier teams in Italy. Prandelli means no disrespect to Lazio, of course; in fact, he is respecting them by making it clear that they are a solid, impressive team that plays particularly well at home. But if Fiorentina is going to find a more permanent home in the top four of Italian football, they will need to start winning, or at least drawing, these games with some consistency. Fiorentina is in relatively good form (although I wish they were scoring more goals), and are relatively healthy. They should take something from this game

Ousmane Dabo, Fabio Firmani, Simone Del Nero and Tommaso Rocchi are out for Lazio. Right now it looks as if only Manuel Pasqual is out through injury for the Viola.

The game will not be televised here in the states. If I get another bad internet feed, I am going to bite someone’s head off.

I like Lazio and the look of their new scoring ace Mauro Zarate. He’s been impressive. But a fully fit and motivated Fiorentina, perhaps hearing the Great Man’s admonition still ringing in their ears, should be more than Lazio can handle. To the shock of absolutely no one who has ever read anything I have ever written, I think Fiorentina can get the three points. I’ll say the Viola win 2-1.

I’ll be back after the match with a recap. Hope you are all well. Forza Viola, everyone.