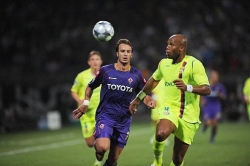 This is not going to be a great big post. I just don’t have that much to say.

First of all, I’ve already been in touch with a couple of Viola fans and have also read the comments of many of the thoughtful posters on the Fiorentina boards, and they have all said, rightfully, that we would have taken a draw in advance of the game if we had the chance. And, with the Viola drawing with Lyon on their home ground, we know that we got a decent result. With the 2-2 tie Fiorentina have kept pace with their theoretical opponents for second place in the group, Lyon, and denied them the chance to get three points on their home ground. Bayern looked thoroughly human today, so even with their three points the group is still wide open. If Fiorentina take care of business vs. Steaua, win at home vs. Lyon, and maybe even take a point of Bayern somewhere, they could be fine and could advance.

Still, everyone knows that today was a missed opportunity. When your team, your beloved team, goes up 2-0 with thirty minutes left to play, your team needs to win. The fact that we couldn’t close out an admittedly very strong team is deeply worrisome. It points to the same problems the team had Sunday in Naples and also had for much of last season. Apologists will point to the fact that we didn’t have our full international, Gamberini, in the back line, and they are correct in assuming that things will get better upon his return. But the club has a larger problem closing out teams, and it is a problem that, if not corrected, will deny Fiorentina a spot in the knockout stages and indeed a return to the top four in Series A this season.

Much of the chatter over the next few days will be about Lyon’s controversial goal, which can be seen here. And in fact it was an incredibly sleazy goal, against the spirit of the sport, and contrary to decent sportsmanship. Lyon are indeed dirty rotten cheating bastards, as well as cheese-eating surrender monkeys. The goal should not, however, be noted as the sole reason Fiorentina surrendered the lead. Lyon played better for much of the game, and had more shots and more possession. The Great Man himself has said the team has only themselves to blame for dropping the two points, and I see no reason to contradict him. What Lyon did was petty and earned them a boatful of bad karma, and I for one hope things turn on them at the worst possible moment. But to figure out why we dropped two points in France today, we don’t have to look at that bad goal. We need look only at ourselves.