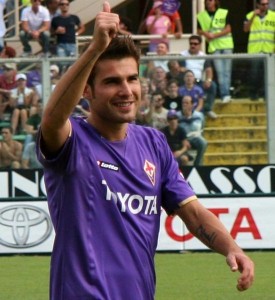 Coming back from a long weekend often means I find myself at my desk, staring at the pile of work that has built up while I was gone. Today, however, I came back to a bit of good news, that Adrian Mutu has apparently signed an extension that will keep him in Florence until 2012. Now all this silly Roma nonsense can come to an end.

There are still conflicting reports coming out of Florence regarding the contract; some reports say it will be signed as late as Thursday, while other suggest it has already in fact been signed, and the club and Mutu are waiting for an official announcement.

This is undoubtedly good news for Fiorentina. Mutu continues, for now, to be the Viola’s best big-game outfield player, at least until Gila finds his old form or one of the kids unseats him. This puts us in a much better position with the Champions League coming up, and puts rest to the notion that Fiorentina are a small team that must always sell their best players.

This should also FINALLY put all the Roma stuff to bed. This report claims Mutu has been joining the crowd in anti-Roma chants lately (trying to win back the fans) so it looks like a safe bet he’s not going to capitol. It’s good for us, and good for Italian football as a whole.

Now that I’m back I’ll be posting more frequently as we move towards the qualifying round of the CL. Hope everyone is well.