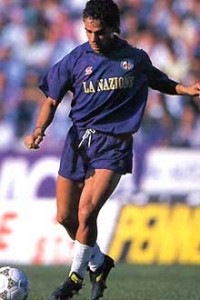 Immediately on the heels of a critically important Champions League qualifier comes this next game, which in its own way is one of the most important matches of Fiorentina’s season. The Viola will open their campaign on Sunday in the opening week’s headline game at the Stadio Artemio Franchi in Florence where they take on their oldest and most bitter rivals, Juventus.

I have been waiting for this match for ages. For various reasons the Champions League qualifying tie wasn’t shown here in the states, and friendlies can be fun but are pretty meaningless. This match, then, is my first chance to really see how our new-look team is doing and how they will cope in the new season.

Fiorentina and Juventus, of course, have a long and often volatile relationship. For many people the most memorable moments include when Juve pipped the Viola for the title on the final day of the season in the early 80’s and purchased Roberto Baggio from the Viola a few years later. (Many remember Baggio's subsequent refusal to take penalties against his old team.) I am always reminded of these highlights every time I visit Florence, usually by cab drivers who refuse to believe that any American might be familiar with even the most rudimentary aspects of Fiorentina's history.

Sunday’s match is colored most recently by Fiorentina’s 3-2 walloping of Juve in Turin, and their subsequent qualification for the Champions League. Indeed little separated the two clubs last year as Juve finished third and the Viola fourth in Series A play. This year looks to be more of the same, especially seeing as how both teams reloaded impressively. Fiorentina’s improvements have, of course, been detailed in these pages and include Gila up front, Melo as a midfield destroyer and Vargas attacking from the back. Juve, meanwhile, have only added to their attack with the addition of Amauri from Palermo and brings a strong overall squad loaded with experienced, consistent players. I am looking (and hoping) for an attacking, wide-open match on Sunday, one that will do the opening weekend of football in Italy proud. In truth, I can’t wait for kick-off.

Starting Line-Ups (The Return of the Blind Guess Department! Hooray!)

(I actually have doubts that Jovetic will start but I’ve seen it reported in three places and am assuming that these people know something I don’t. They usually do.)

Pavel Nedved looks out for the Bianconeri. Good riddance, I say. All sources I have are currently reporting Mutu will not play for the Viola. Damn it.

I have been talking myself into this all week, but I really do think Fiorentina can take this game even without Mutu. I honestly believe the great man has been focusing on it since the schedules were announced last month, and a win would get the team on absolutely the best foot as they move forward in the new season. Plus, it would be so fucking great to stick it to those bastards from Turin, wouldn’t it?

A Fiorentina match will actually be televised live here in the states! It’s been so long I can’t believe it. The game will be shown on FSC at 2:30 PM EST. If any of my friends are reading this, don’t bother calling during the match; the phone will be off the hook.

I will be back on Sunday night with a recap, as well as any last-second transfer news that might happen. In the meantime, if you are out this weekend, don’t forget to raise your glass and toast luck for the upcoming season; not that we’re necessarily gonna need it, but it sure can’t hurt.