The Great Man Gets a Birthday Present, and Mutu gets Hurt

Share All sharing options for: The Great Man Gets a Birthday Present, and Mutu gets Hurt 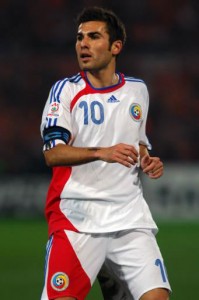 Today in Italy Fiorentina played a charity/exhibition match vs. Amici del Forte, winning 6-2 with braces from Pazzini, Osvaldo and Kuzmanovic. Apparently Prandelli played his usual 4-3-3, but still experimented with the line-up, which included, among other oddities, Marco Donadel as one of his center-backs. The full match report can be found here.

Although a good time was apparently had by all, (well, except for maybe Amici del Forte) the match was overshadowed by two events, one happy and one not. The good news was that the great man celebrated his 51st birthday today, leading to what the match report called a “party-like atmosphere” in the stadium before the game. Happy Birthday, Mister!

More problematic, however, was the news that forward Adrian Mutu suffered a serious injury blow while training with the Romanian nation team. According to various news reports, Mutu injured (some reports say he dislocated) his elbow during practice. This will apparently rule him out of the second leg of the Slavia tie and also the first round match of the league against Juventus. That later piece of news blows extra hard, since virtually everyone in purple was looking forward to a fully fit Viola facing off against their old rivals.

Apparently Monto and Gamberini also have owies (Ricky’s got a bum thigh picked up in China) and that is what led to the heavy experimentation during the friendly today. We may see a front three of Pazzini, Gila, and Osvaldo next week (three center-forwards. Huh.) with who-knows-what filling out the back line. This all makes me very nervous, but again, this is why the Great Man and the front office staff put together a big, deep team this year: injuries will be picked up, and we will just have to fight through them. I was just hoping we wouldn’t have to start so soon.

Take care, everyone. Be back soon.