Catching Up With Ricky in China

Share All sharing options for: Catching Up With Ricky in China 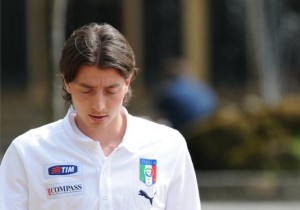 First off, sorry about the slowdown in posts over the last few days. Work has been a little hectic, and when you throw that in the mix with the general responsibilities of being a Dad to a 9-week old, well…

But it is a big week for us in the Viola. Tuesday is the first leg of our Champion’s League qualifier with Slavia Prague, a match I hope to preview tomorrow night. (Which will be tricky, as I just don’t know much about our opponents.) Regardless, Tuesday should be a lot of fun.

In the meantime, however, I wanted briefly to point your attention towards China, if it was not already there. As you all surely know, The Olympics are currently happening in Beijing, the Italian U-23 team (plus Tommaso Rocchi of Lazio) is playing in the Olympics, and our own Riccardo Montolivo (who is, as my longtime readers know, the best player in the world with an 11-year-old girl’s haircut) is playing for Italy. That makes me more interested than normal in what is going on in Beijing, so I caught today’s game vs. South Korea to see how our man is doing. (I missed Italy’s first game due to a family obligation.)

In a word, Monto is doing fine. Although he played deeper in midfield than he typically does for the Viola, he was still heavily involved in his team’s offense. He placed (as he did all of the second half of last season) a number of long passes in the perfect place, and in particular launched a gorgeous 40-yard free kick that landed on the foot of the unfortunately offside attacker. At the end of the match he ran stride for stride with a breaking-away Robert Acquafresca, receiving his cross, and knocking a laser against the post before putting his own rebound in the net. He then coolly ran to the advertising boards and waited for his teammates to tackle him. (Thus causing me to scream out in fear that they would inadvertently injure him.)

So Ricky is doing great, and making his club and his fans proud. The only thing we know for sure about Tuesday’s CL match is that Ricky won’t be playing, and judging by his form in China, he will be missed.

I will be back with the match preview and then a review of the game. Hope you are all well.