Share All sharing options for: Fiorentina: News, Notes and Nonsense 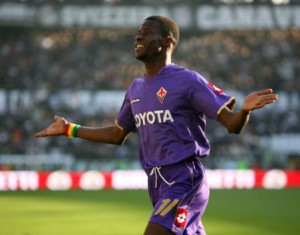 God, I hate the off-season. I miss watching my club every week. I thought this summer wouldn’t be that bad, since we had the Euros, which turned out to be really fun. But now that’s over and I’m left surfing the ‘net every day for rumors of my team. I can’t wait until things get started again; if I watch one more “classic” match on FSC I’m going to break down and start caring about baseball again. Anyway, in the meantime, here’s what’s been going on at our beloved club since the weekend.

First, a couple of fairly impressive signings were announced. First, former Torino captain Gianluca Comotto signed with the Viola to help strengthen the back line. I like this addition; everything from his experience and his leadership to his defensive versatility will be useful next season.

The Viola also signed a highly regarded young Brazilian forward named Jefferson. He’s one for the future, although some of the reports I’ve read say he has the potential to become a very strong player. I won’t pretend I’ve ever seen him play, but the Great Man’s track record on signing young people suggests that it could pan out, so I am all for seeing what young Jefferson can do.

According to Viola Bigwig Corvino, that’s it: he says the Viola won’t be signing any other players this year. It’s undeniable that they’ve spent a bunch of money and dramatically improved the squad for the upcoming season, all without losing any of the most important players at the club. We will see if this is indeed it, or if there in fact will be more signings over the remaining days of summer.

One thing that’s for sure is that regardless of whether the signings actually stop, the rumors will not cease until the transfer window closes. The latest one, for this week, is that Fiorentina will sign Inter’s Nicolas Burdisso in order to get more help at the back. Interesting, but this one has a long way to go before it becomes fact.

Finally, on a sadder note, it looks like Papa Waigo is set to leave the club, to destinations still undetermined. Look, things are going to be tight on the front line with Gila, Mutu, and a cast of supporting players fighting for playing time, but I liked the freakishly long-legged Papa Waigo and wish him well wherever he winds up. If for no other reason, he must be remembered fondly by Viola fans for coming off the bench in the Juve game (notice I don’t have to explain WHICH Juve game I’m talking about) and playing like a man. Papa, you should never have to buy a drink in the world’s most beautiful city every again.

I’’ll be back soon. Hope you all take care and, like me, try to keep it together until the matches start again.