Share All sharing options for: The Great Man Speaks 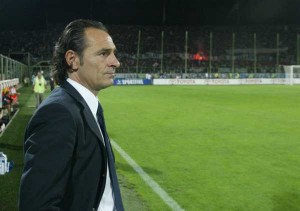 Viola coach Cesare Prandelli (regular readers know I always refer to him as the “The Great Man,” but it’s the off-season so I want to explain myself) gave a wide-ranging interview this week where he spoke of his hopes for next year, saying that he thought the team could do damage in the Champions League and was also gunning for another top-four finish. He thinks that Inter and Juve will be the favorites to get the Scudetto next year, and that Roma and Milan will surely be in the hunt as well. He also expressed excitement that Jose Mourinho is coming to Italy but is curious to see if his success will translate to Series A.

Most interestingly, however, the Great Man (who seems, characteristically, true to his word that he wants to stay at Fiorentina a long time) spoke passionately about his intent to make the Viola the favorite team of neutrals, with their attacking flair and reputation for fair play. He expressed that he heard this support from a number of fans in Italy who pulled for the team in the UEFA Cup when all the other Italian teams had been knocked out of European football, something I’ve noticed as well. The Mister surely inspires hope next year, both that the team will be good AND fun to watch.

In other Viola news, Midfielder Riccardo Montolivo has been called up to the Olympic team (and Osvaldo is an alternate) but this means that the player will miss the first round of CL qualification. Monto, who has come to bleed purple over the last two seasons, is happy about the Olympic call-up but also saddened as he feels he may be abandoning his club at a crucial moment. It’s true that he’s a grievous loss, especially considering his form last season, but we will simply have to go on without him.

Finally, transfer rumors continue apace. I will report anything on that front when I have something concrete to report.

Hope all of the USA-based Viola fans have a good Independence Day weekend, and I hope all the international readers have, well, just a good regular plain old weekend. Be back soon.