The Mutu Situation – Where We Stand

Share All sharing options for: The Mutu Situation – Where We Stand 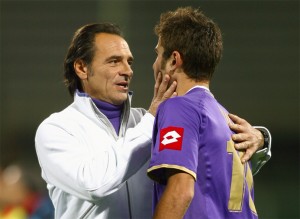 Since this latest Adrian Mutu-to-Roma fuss kicked up yesterday, I have been waiting to post my thoughts, hoping that it would reach some resolution before I chimed in. It now looks like this may go on for a few more days, so I wanted to get something out to the Viola faithful and give everyone a chance to weigh in.

Let’s step back for a moment; as I write this, late in the evening on Wednesday, here on the east coast of the USA, Adrian Mutu is still a player for Fiorentina. It did not look like that would be the case 24 hours ago.

As you all know, the “Mutu to Roma” thing actually started picking up steam at the end of last season, and it was a popular topic in the first few weeks after the Euros when there wasn’t much going on. Realistically, it was mostly a play by Adrian to get a bit more money, as he knew his value was high after his fine Series A season. However, the Great Man came out and said Mutu was integral to his plans, and Adi said he wanted to wear the Viola for life. So the story kind of ran out of steam.

Then, rather out of the blue, a major story hit the rumor mill yesterday (Tuesday) that was actually true: Roma had put in a real-live offer to buy the 29-yar old forward, for somewhere in the neighborhood of 20 million euros. Serious gasoline was thrown on the fire when Viola Sporting Director Pantaleo Corvino reported said that he would be willing to sell the player for the right price. All signs, it seemed, pointed towards Mutu walking.

The response was unsurprising: every major sports paper in Italy reported that Mutu was already a Roma player, and reports surfaced all over the Web that it was a done deal. Bloggers and posters all over the ‘net (including over at the Roma Offside) held detailed discussions of where Mutu should play so as best not upset the delicate Mr. Totti.

All of these folks, however, failed to consider one important factor: the Great Man. Cesare Prandelli, the best coach in Italy, is different from other people in the football business. He is a man of honor, and a man who means exactly what he says. Two weeks ago he said he wanted Mutu in his squad. Unlike other coaches, he meant it. This morning, as a result, he had a meeting with Adi Mutu and told him he was staying. Prandelli then had a meeting with Fiorentina’s president, Andrea Della Valle, and told him he didn’t want Mutu sold. Within hours, Fiorentina released this statement, essentially saying Mutu was staying in Florence.

So what happened here? Why was everyone so sure that Mutu was going? It is simple, really. People simply treat Prandelli as they would any other football man, as a man who says things he does not believe. But our coach is different. He does not say things for spin, or for public consumption. He said two weeks ago he wanted Mutu in the squad, and so today he remains in the squad. End of story.

This is similar to the constant belief that the Great Man is about to leave the club for greener pastures like the Azzuri or Juve. On the surface, of course, it seems likely: Prandelli is the best coach in the country, so he will probably wind up a huge club or the national team. However, that theory discounts one important fact: that Prandelli keeps saying he wants to stay at Fiorentina for life, and build a career like Ferguson at Manchester United. Inspiring words, and I for one have no reason to disbelieve anything the man says, because he has never lied to me. Series A teams and fans would do well to listen to him as well as I do.

Anyway, what do we make of this whole Mutu thing? Now that the Great Man has weighed in, I do believe he is staying. Roma could come back with a massive counter-offer, and the coach and the ownership would be foolish not to consider it, but I do believe all of the momentum is gone from Roma’s attempt to lure Adrian to the capital.

As for Adrian himself, I am glad he is staying, if he indeed does stay. In any other year I would have sold him, as he is 29 years old and had some injury problems last year. He is also not loved at the club the way one supposes a scorer of his ability would be.

However, this is not any other year. We have, of course, qualified for the Champions League, and hope to advance to and perhaps beyond the group stages. To do that we will need the services of (love him or hate him) our most skilled outfield player, the one man who can make a difference more than any other on the pitch, be it with a bit of magic in open play or from a spot-kick. If we are going to advance (as well as continue to contend in the league) we will need a healthy and happy Adrian Mutu in our ranks. I’m glad if he does indeed stay.

Hope everyone is well. Forza Viola.