Share All sharing options for: Fiorentina and Great Derbies 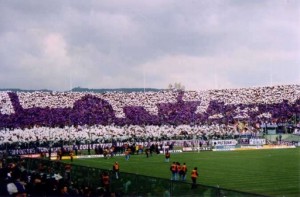 The English-language magazine World Soccer is a staple for many football fans here in the States and in the U.K. It combines solid reporting with a few thoughtful columnists, but most importantly it is essentially the only magazine that tries to cover the whole world game. It often bites off more than it can chew, but I appreciate the effort.

In the latest issue available here in the States (the July 2008 issue) the magazine has a cover story on the “50 Greatest Derbies in World Football.” Obviously it is the off-season for most leagues, and so the magazine needed a bit of a puff-piece/filler piece to take up some pages until the real football begins again. However, it is a pretty fun article.

I was surprised and happy to see the Fiorentina-Juventus rivalry listed as the 12th best in the world. I didn’t think the rivalry would get that kind of love from an English-language magazine, but it almost broke into the top ten and is ranked higher than Arsenal v. Spurs, Genoa v. Samp, Man United v. Liverpool, Benifica v. Porto, and even the Milan derby. The games listed as “better” than the Viola/Juve match up are some of the true world classics, and include Betis v. Sevilla, the Rome Derby, the Old Firm, Boca v. River and Real v. Barca. So let me ask you, the readers, two questions.

1). First, do you think the rating is about right? Do you think it is a better derby than the Milan derby, but not as good as, say, the Belgrade derby (which is legendarily vicious)?

2). Secondly, do any of the readers out there have any first-hand experience with the Viola-Juve rivalry? Sadly, I have never been to a Juve-Fiorentina match in person. (Although I enjoyed the shit out of the Viola beating Juve on the road last year, a column one can find here.) Please share your own personal experience with the rivalry.

I hope everyone is doing well.