Share All sharing options for: Fiorentina 1 – Hellas Verona 1, and Some Stupid Bullshit 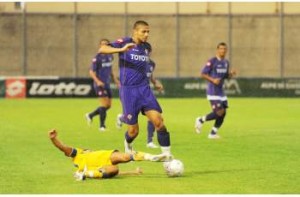 Today the Viola played their second friendly of the pre-season, against Hellas Verona, and drew the match at one goal apiece. The match had promised to be something of a homecoming of sorts, as the Great Man had been a former gaffer at Hellas, and Gila, Mutu and Jorgenson had all formerly played there, most of them under the Great Man himself. The good time was apparently spoiled, however, by racist chanting by some of the Verona fans directed at Papa Waigo and a few other black Fiorentina players.

Most of the match reports I’ve read so far aren’t really clear on the details, and they are all in Italian. (And my Italian is really, really, rusty.) Apparently the team played well and Gila in particularly shone, setting up the lone Fiorentina goal. But all of that was overshadowed by the chanting. I didn’t read any player comments on what transpired, but the Great Man was apparently pretty disgusted by what he heard and said that chanting like that “speaks for itself and doesn’t really deserve any further comment.” It will be interesting to see whether the English-language press pursues this story over the next few days.

A few years ago Tim Parks wrote a really great English-language book about football in Verona called A Season in Verona that many of you have probably read. One of the central arguments of the book is that the racism in Verona is really overstated and not much worse than any other Italian city. That may or may not be true, but the Veronese may have hurt their case today. I’m sure Juliet is spinning in her fictional grave.

(A Season in Verona is still a must-read however; riveting stuff, especially because it features so many future Viola players.)

Anyway, aside from this stupid bullshit which gives ammunition to everyone who thinks Italian football sucks, it was a good game for the Viola. They played well once again and their big players seem to be stepping up in preparation for the new season. They play again in a few days, so I will be back to recap that game and hopefully talk about nothing but the action on the pitch.

I hope you guys are all doing well. Forza Viola.