For Some, the End of Heartbreak; For Others, There is only Pause

Share All sharing options for: For Some, the End of Heartbreak; For Others, There is only Pause 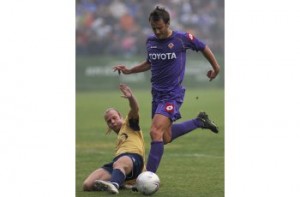 For frivolous people such as myself, today marked the end of my heartbreak for the summer, for the mighty Viola were back on the pitch. Fiorentina played amateur club side Sciliar in a pre-season friendly today, winning 12-0. Giampaolo Pazzini had a hat-trick, and there were braces for Mario Santana, Manuel Da Costa, and Franco Semioli. Gila missed a pen but also scored, as did fellow new kid Stevan Jovetic. Obviously it was a game against a team of amateurs so virtually nothing should be read into this, but by all accounts the team looked good, had fun, gelled well, and nobody got hurt.

While we are talking pre-season friendlies, here is what is scheduled for the Viola before the regular season begins. I think it is a bit amusing to look at the first four teams listed, which are, with all due respect, lower-tier teams, and then compare them to the last match on the friendly list. That’s the one I would like to have tickets for. I suspect most readers feel the same way.

So my “heartbreak” is over. The Viola are on the field again, and I can see the light at the end of the tunnel that is the start of the league. For one man, the Great Man, in fact, a football game is a mere moment to distract oneself from the pain that will never cease. As this sad, sad story makes clear, Cesare Prandelli could hardly wait for this season to begin, because it brings distraction from the numbing pain of his wife’s recent death. The story of the Great Man’s torture is indeed a heartbreaking one, and I know we all hope he can find comfort in his work and in the admiration of his many, many fans.

That’s all for now. I’ve been meaning to post something on the recent Mutu-to Roma nonsense going around, but I’ve been waiting for it to clear itself up. It seems as if he is now probably staying, but we should know more in a week. I, for one, am ready for the silly season to end and the football to begin.