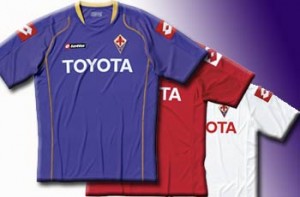 Okay, the title of this brief little post is a bit of a joke. My lovely and good-humored wife occasionally refers to me as the President of the ‘Toyota Enthusiasts Society’ not because of any fondness for that particular automobile (I don’t even own a Toyota) but because seemingly half the clothes I wear have the word “Toyota” slapped across it at one place or another.

Yes, I am one of those guys. I wear football shirts a lot. I mean A LOT. I am lucky enough to have a job (I am the editor of a magazine) where I sit in an office all day reading and editing, so it doesn’t matter too much what I wear, and my Publisher is a good guy who doesn’t mind if I wear sportswear to work. So much, much more often than not, I am wearing a football shirt, be it a workday or the weekend.

I have lots of shirts, including a Baggio Italy shirt from ’98, a few Cantona Man United shirts and a few Zidane shirts, including one, I confess, that’s a Juve shirt. I don’t wear it much. But mostly I have Fiorentina shirts. I must have six or seven, dating back to 94 or 95, and I have many with the names and numbers, including some of my favorite players like Batistuta, Toni, and Pazzini.

Why am I even bringing this up? Because today on the Fiorentina website next season’s shirts were displayed for the first time. As you will see, they are almost exactly like last year’s version, with a little bit more gold piping and a few other very minor differences. The alternate white and red shirts seem about the same as well.

So there you have it. People like me, who like wearing football shirts, will probably eventually buy it. Those not into shirts will shrug and move on. I am only bugged because for the last few seasons I have been able to go to Florence, catch a match, and buy the new season’s shirt at that football shop down the street from the Duomo, near the Academia. With my newborn son here, it looks like I’m going to have to skip the football trip this year and buy the shirt online. Small price to pay, I understand, for the privilege of ushering another Viola fan and Toyota enthusiast into the world.

I’ll be back later this weekend with thoughts on the very happy rumors going around that Mutu and Bassy are going to extend their contracts. Take care, everyone.