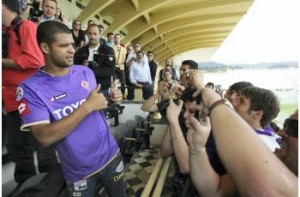 First of all, my apologies again to all of the loyal readers who turn to this blog for their much-needed fix of Fiorentina news. I understand that throwing up a paragraph or two every other week just doesn’t cut it. For those of you who don’t know, my first child, (a boy) was born three weeks ago today, and I have been spending the (vast) majority of my time hanging out with him. I hope that my near-daily postings on the Viola during the season has bought me a little credit; I promise to be back to bigger posts more often soon.

Anyway, my boy could not have picked a better time to come into the world. Not only was he born right after the Series A season ended (thus assuring that I didn’t miss any Fiorentina matches) but he was brought home from the hospital the day before the first match of the Euros. Thus, since I have been home on paternity leave helping to take care of him, he and I have watched every single minute of every match together on ESPN. OK, he was sleeping for most of the games, but we still had some nice bonding time together. And anyway, how many three-week-olds do you know who can say that they’ve seen every kick of the Euros?

(Incidentally, I have learned two things about my son from watching the matches with him. One is that he seems to like Croatia, since he always stays awake during their matches, and another is that, like Dad, he really seems to like Italian national team. He was asleep for the entire 120 minutes of their match with Spain but then somehow broke down into a massive meltdown of tears and screaming the moment the Azzuri lost on penalties. Interesting. I hope he is that committed to the Viola.)

Anyway, even as this exciting tournament goes on, news of the most important club team in the world continues to flow. It mostly involves transfer news, as players continue to come and go, and there is also news of Fiorentina’s plans for the new stadium in Florence. All of this can be found on the clubs main website here.

There are two stories that I do want to highlight briefly. The first involves Adrian Mutu and his well-publicized financial troubles related to his time with Chelsea. It now appears that the player and the club may be able to work around all this and thus he can continue to wear purple next year. Hopefully a sensible solution will be found. Mutu divides opinion, but he can be a special player who has the capacity to win games nearly on his own. We’re a better team with him in the side.

The second story/rumor making the rounds is that Sampdoria has apparently made an offer for Pazzini, for at least a co-own if not an all-out buy. I don’t like this move one bit. I think you have to give Pazzini another year, even with the crowded front line Fiorentina now has with the addition of Gila. Yes, Pazzini had an off-year and yes Osvaldo might be special (until my son was born Osvaldo’s bicycle kick vs. Torino was the last thing I thought of before I went to bed every night) but Pazzini has a chance to be special too: a true target man in the center of the line who has the skill to finish. He should be given a chance to fight for his spot next year, and a chance to earn it.

OK, that’s it from here. I promise these posts will start increasing infrequency fairly soon. I hope you are all well and looking forward to the start of next season as much as I am…