Share All sharing options for: Bring On Bassy Frey! 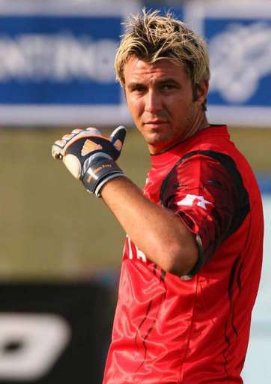 One thing I wanted to do during the Euros was to track the performance of current and recent Viola stars as they played for their national teams. That plan has gone bust as I am spending 95% of my time with my squirming 10-day-old son who is currently fussing in my lap as I write this. Still, I can offer a super-quick summary of our guys:

Alessandro Gamberini (Italy): Has not played yet. But Christ, why not? Let’s throw in a Fiorentina player and see what the hell happens.

Adrian Mutu (Romania): Was quiet in his first match, had a sweet goal today, and then blew a chance to take down Italy with an awfully lame penalty kick saved by Superman. I thought he could open up the world’s eyes at this tournament. He’s been good, but has not met my hopes.

Tomas Ujfalusi (Czech Republic): Our former captain has played all right, but every time they show the big lug on screen, he seems to be handling the ball. I think I saw him do it twice in the last match, and get away with it. Don’t make the nonsensical Tommy Smyth call you out again, Tomas. Oh Captain, my Captain!

Finally there is the curious case of Bassy Frey, the world’s best goalkeeper. (Bear with me.) He is currently languishing on the French pine, waiting hopefully for the knowing nod from Raymond Domenech that will allow him to dash on the field and save the day. Hell, Coupet gave up four goals today! The stars are telling me Bassy could have saved at least one of them. Give the man a chance! He won’t let you down.

OK, that’s it for me. I’ve got to go change a diaper. Be back soon.