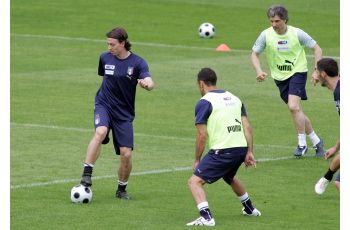 While I wait around for my baby to be born, and big things are happening elsewhere on the peninsula (I’m giddy at the thought of the Special One in Milan, for comedy’s sake alone) I thought I would quickly bring you the latest news and nonsense from the world of the Viola.

First, it looks like the Gila thing may actually happen. Good stuff. That should fun things up around the Artemio Franchi next season.

Sadly, it looks like the Barzagli signing may now NOT happen, as he is currently being linked to Wolfsburg in Germany. Apparently it was a wage issue. Bummer, but I think I’ll survive. More on both of these stories here.

In other less happy news, it looks like Fabio Liverani is definitely on his way out, with Palermo (and to a lesser extent, Lazio and Naples) rumored to be his next destinations. If it’s all true (and it seems to be) than a big thank you for your service, Fabio. And like I said a few months ago, I forgive you for the missed penalty thing. It’s all water under the bridge now.

In other “former Viola” player news, it looks like Ujfalusi will be captaining the Czechs this summer at the Euros. Good choice. Oh Captain, my Captain!

Finally, as it has been rumored for some time, Montolivo is afraid his head is on the chopping block as the Italian National Team is cut to 23 players for the Euros tomorrow. We’ll see how it all plays out, but at least Ricardo (presumably) got to see those streakers in the Italian camp yesterday, so the experience wasn’t a total wash….

I’ll be back soon. Hope all you Fiorentina supporters, wherever you are, are doing well.