Fiorentina: Reviews, Previews, and a Whole Hell of a Lot of Fun

Share All sharing options for: Fiorentina: Reviews, Previews, and a Whole Hell of a Lot of Fun 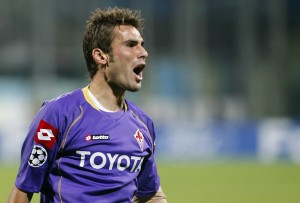 Obviously things are getting a little busy here in my happy household, between the holidays and family obligations and all the rest. Sometimes I feel like I barely have enough time to WATCH Fiorentina, never mind write about them with any regularity, and this “two games in three days” business really stretches me to the limit since I have a full time job, am a freelance writer on the side, and a dedicated Dad to a wonderful sixth-month-old to boot on top of this gig. So please forgive me if I cram a brief review of Sunday’s match vs. Torino with a preview of out last Champions League match of the year. (Hopefully we’re right back in it next season.)

First, however, I had the scare of my life when I logged on to the always despicable Goal.com and saw a news flash that said Fiorentina was involved in a ‘aircraft scare’. I had visions of our boys being involved in some terrible tragedy like Gran Torino or Manchester United in the 1950s; instead, it turns out the Viola’s plane was delayed for an hour because of minor engine troubles, but everything was fine. Goddammit. Fuck you, Goal.com.

Onto Sunday. Obviously I was pleased with the result. We got a much-needed win, (albeit vs. a deeply flawed team) and proved that we can be a potent force on the road. The defense was okay, even though Per Koldrup is still the absolute definition of mediocrity and Melo committed another stupid foul, which this time led to a penalty. I liked virtually all of the play in midfield, where Kuz was effective and Monto was all over the pitch helping out even though he wasn’t attacking the box like he had done in recent weeks. The real pleasure, however, was up front, as it usually is when your club wins 4-1. Gila was his usual self, continuing this season’s unnerving ability to score seemingly at will. He has a real chance of attaining his stated objective of being Series A’s leading scorer. (he has 11 goals in 13 appearances in the league and 14 strikes in all competitions. I think he may have already earned back that transfer fee.)

The real revelation of the weekend, however, was Mutu. Now that he is apparently fully healthy once again after a sometimes indifferent start to the season, (due to injuries) we can fully see why Prandelli held onto him over the summer and why he is such a key member of the squad. His fine free kick opened the scoring and his devastating runs, smart passing, and close control in the box led to two of the other goals. He is not only the best finisher on the team (better than Gila) but he is the best and smartest passer on the club; his ability to stay cool and collected in the box makes him virtually the anti-Mario Santana. If Adi can continue to stay healthy and keep his form as it was on Sunday, then we can be a real danger in the league and, hopefully, in the UEFA Cup.

Aside from our next CL match (which I’ll speak of in a moment), we next have Catania, Samp, and Lecce in the league, with a cup match vs. Torino also thrown into the mix. I would love to get seven of a possible nine out of the next three league matches. We are just starting to see a separation between the men and the boys in the league this year, and we are still tenuously in the “men” camp. A few more wins would place us solidly as contenders going forward.

In the meantime, of course, we have a surprisingly critical final Champions League match tomorrow vs. Steaua Bucuresti. As we all know, the Viola have been eliminated from advancing in the Champions League, but a win or a draw tomorrow allows Fiorentina to finish third in their group and thus qualify for the UEFA Cup, allowing the boys to continue their European Adventure. There is some debate about whether the UEFA Cup is even worth it (some would prefer us to focus on the league) but I for one still like the European nights, even in the little-sister competition, and feel like the money, prestige, and experience to be gained from the competitions is well worth it and makes up for the wear and tear on the players. Plus, hell, this ain’t the Champions League: we could very well win the damn thing, and I would love a trophy.

But first we need to get by Steaua tomorrow. As we know they drew us at home in a match we HAD to win, so they are no pushovers. Also, a win for them, at home, would propel them to the UEFA Cup, so look for them to be at least as hungry as we are. I’m looking for the Great Man to field a solid team and go out and really try to win this one. In spite of the fact that it features two teams eliminated from the competition which will not be shown anywhere near American TV, it should be a hell of a match.

All the usual suspects are a bit late in getting up their guesses for starting line-ups, so I am going to hold off until closer to game time so I can crib off them before taking some guesses of my own. But I am guessing we will see something pretty close to Sunday, although perhaps a little more defensive (perhaps Donadel) since a draw gets us through as well as a win.

The match will not be shown here in the states. Christ, I hope we draw some English teams in the UEFA Cup.

A cautious 1-0 win for the boys in the purple shirts.

I hope to be back Wednesday night with a recap and a look forward to our next European Competition. I hope. Take care everybody, and Forza Viola.