Share All sharing options for: Fiorentina v. Torino (Part the Second): The Cup 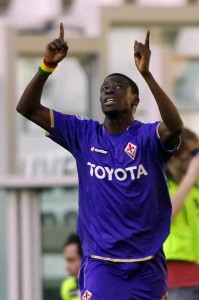 Tomorrow in beautiful Florence the Viola will take on familiar opponents Torino (we just played ‘em two weeks ago) in a last-sixteen match of the Coppa Italia. This is a one-off match, with the winner advancing (they go to penalties if tied) and the Great Man has said the cup is important to him and he wants to win it, so it could be a pretty good match tomorrow.

Regardless, look for some less familiar faces for the club in the starting line-up. Prandelli has already announced that Pazzini will get a start and has emphasized that the kid is still in the club’s plans. He hasn’t said anything else as of yet about the starting line-ups, and I won’t really venture a guess other than to say that I don’t think there’s much that would surprise me. We could very well see Osvaldo up front with Pazz, and there could easily be names like Waigo, Semioli, Almiron, Jorgensen, or pretty much anyone else in the starting eleven. I guess it will all depend on how serious Prandelli really wants to win this thing; if he does, he’ll put out a starting line-up with four or five regular starters in it; if he is interested in using the match to look at guys before the window opens, than any guess is pretty much out the window. We shall see.

The game will be shown live here in the states at 11AM EST on GOLTV, because Goal has the rights to the Coppa Italia. Its shocking that THIS match will be shown live on TV, and yet I didn’t see a single Fiorentina Champions League match live on television. (One was shown on delay on Sentanta.) Regardless, I hope Ray Hudson has the day off tomorrow. Neither Barcelona nor Real Madrid is playing in the match, so he’ll have no idea who anybody is.

Christ, I have no idea. I’ll say we win 2-0 based on our home form and the whuppin’ we laid on them ten days ago.

I’ll be back after the match with a round-up. Hope you are all well.