Share All sharing options for: Knockin’ On Heaven’s Door 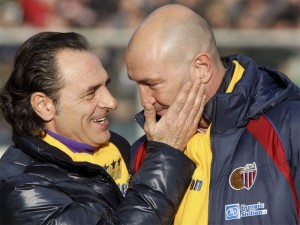 Today in beautiful Florence Fiorentina defeated Catania 2-0, winning their second strait game in the league and third in all competitions. It’s funny to think how time can fly in football; just a few short weeks ago we were distraught that the team had been eliminated from the Champions League, had no guarantees to make the UEFA Cup, and were teetering in Series A. Now we’re safely in Europe’s second-most-important club competition and are sitting just outside the top four in the league. Things are most definitely looking up.

Allow me first to offer what is becoming a standard part of my blogging about the club, the customary paragraph where I apologize for not blogging more. In this case, I did not get a formal preview up of the match. Mea Culpa. I am finding more and more often that being a good blogger often conflicts with being a good and responsible father and all that it entails. If it comes down to writing the Catania preview or playing with my kid, I’m probably going to play with my kid. Still, I’m going to keep plugging away at this; I love writing about Fiorentina, and I like all of you fellas who contribute. So please just bear with me.

My excuses could extend, I suppose, to the fact that I didn’t actually see the match today, although in that particular case it really isn’t my fault. I was up and at the computer at the starting time (with my little boy in tow, as usual, who probably will grow up thinking the only place people go on Sunday mornings is to Italy to watch soccer games, and not to church) but all the feeds were terrible today, so I got to see very little of the actual game. (I saw a bit on one choppy feed and a bit more on the RAI International post-game show.)

What can I say about the game, then? Very little. It seemed like the Viola attacked well, and obviously played fairly good defense. Mutu had a nice goal and had a few other chances; if he stays in this form we should continue to do well. Gila continued his ridiculous goal-scoring run and had an outrageous goal that was of the type that shows up on highlight (and blooper) reels for years to come. You can see the highlights of the match here.

So what do we take from today? The main thing for me is that we did what all good, solid, professional clubs do on a day-in, day-out basis: we beat the team we were supposed to beat. Yes, it was a home game (we need more of that on the road) but if we continue to have this kind of success when we’re playing the middle and lower-tier teams, we’ll be fine.

Things are looking up. Right now we’re in fifth, and just a point Milan and Napoli who are sitting 3rd/4th. Hell, were only four off Juve in second. (Inter might be running away with this damn thing, but that’s another story.) It looks like we’re going to go into Christmas right in the think of things, and as Fiorentina supporters we couldn’t ask for anything nicer.

We have Torino in our first Italian Cup match on Wednesday (look for Pazz and Osvaldo up front, I imagine) before Samp away on the weekend, out last match before the hateful holiday break. I will be back mid-week to talk about the cup, and until then I hope you are all well. Forza Viola!