We Are Like Unconquerable Road Warriors, Only the Exact Opposite 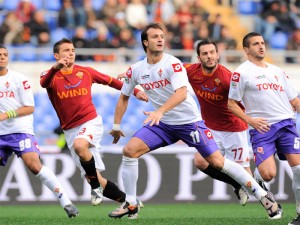 What does it mean when your team can’t win (or even draw) on the road?

Does it mean they’re no good? Maybe, but they look like a pretty good team when they are playing at home.

Does it mean they have no heart? Maybe, but they’ve showed heart plenty of times in the past.

Does it mean that they’re just too young a club? Maybe, and they do have a lot of kids on the team, but they also have a lot of older veterans who have been around the block. Those guys should be able to lead the kids through hostile conditions on the road.

Does it mean they need “home cookin” to play well? Maybe, but the food in Siena is pretty close to the food in Florence, and they can’t win there either.

Does it mean their defense needs to improve? Maybe, but Frey was God-like today, and Gamberini was my man of the match.

So it must be the boys up front then? Maybe, but they sure looked good last week putting four past Udinese.

So what the hell is wrong with the club? I sure the hell don’t know.

Look, today is nothing to really panic over. We lost 1-0 to a hot, good team in a match that some commentators are calling the game of the year in Series A. No shame in losing to Roma in Rome. But this monkey on our back that is the road needs to be figured out and pronto, by the Great Man, or by the players, or by Corvino, or whomever. The Viola are starting to give off the stench of a seventh or eighth place team, and I don’t like it one bit. We are better than this and should be contending for a CL spot, but it means we have to beat some good teams, and it means we occasionally have to get a point or three away from Beautiful Florence.

Other quick thoughts from the match…

• What do you think Frey is thinking as he makes one highlight-reel save after another, only to lose 1-0 for what must seem like (to him) to be the thousandth time? “Gee that Milan shirt would feel real good right now. Or Bayern. Hell, anyone who can score an occasional goal.” God forbid.

• As I said, Gamberini was the man today. Did a great job of containing Vucinic, who scares me to death, and even had time to help out the always mediocre Per Kroldrup. Good job by him.

• A few impressive moments from Monto, but I need more. If you are going to take the next step, Ricky, to full international and replacement for Pirlo on the national team, you have to get to work soon. We can’t wait forever. Now is as good a time as any. Let’s see it.

• I hate to let my passive-aggressive, love-hate (mostly hate) relationship with Mario Santana continue to play out in these pages, but Christ. He looked pretty good for the first hour and served as a nice connector between midfield and the boys up front. For the millionth time, I thought “maybe I’ve underestimated you, you wily Argentinean.” And then, around the 65th minute (I wasn’t taking notes because I was holding my son) he gets the ball ALONE right outside the box on the right side, with Gila at the penalty spot with space. And Santana PANICS, as usual, and shots the pass a mile in front of Gila where it rolls out harmlessly for a free kick. I screamed and upset my boy, who never understands why I yell at the computer. Anyway, what’s the lesson? Mario is OK playing deep, but he turns into a twelve-year-old boy about to be kissed for the first time whenever he gets near the box. His crossing sucks. His shooting sucks. If asked to make the final pass he’ll blow it. He’s going to make me crazy before the year is out.

To be fair, My Precious Jovetic was promptly subbed in for Santana after Mario’s crap pass, and he didn’t do that much better. But I would rather the kid start over Santana at this point. Or at least play Mario in Midfield so I never have to see Almiron in a purple shirt again. He is back to playing shitty again, too.

Okay, that’s it for me. I’m exhausted. I hope you are all well. I’ll be back mid-week with news and notes on our favorite club.