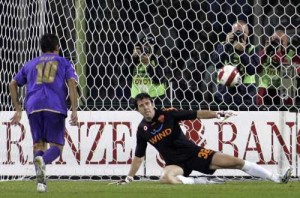 On Sunday in the eternal city, as the pope prays, as the tourists wander slack-jawed around the Forum, as motorists honk and flash their lights and curse at each other in a dozen different languages, as the beggars beg and the hookers hook and as the teenagers lay upon the Spanish Steps as thousands of kids have before them, the Romans will turn their eyes towards their Olympic Stadium where their club will continue to try to salvage their season. Standing in their way is MY club, the mighty Viola of Firenze. Scandalously, SCANDELOUSLY, the match will not be shown here in the United States, in spite of having the potential to be the best match in the world played on Sunday. (Yes, much better than the Arsenal-Chelsea snorefest you’d have to pay me to watch.) The program directors of FSC and RAI International, in all their wisdom, have decided they would both, AT THE SAME TIME, prefer to show the Inter-Napoli match. That’s great. I’ll just watch the Fiorentina match on my computer. If my guys score, I won’t know if it was Gila, Montolivo, or Mutu, since they will all be purple blobs playing against maroon blobs on a great big green blob. I’m looking forward to it.

Roma, as you can see from their recent record, has really rounded into form in the last few weeks. They are coming off back-to-back 3-1 wins in the Champions League, and walloped Lecce last week in the league following their derby win over the other white meat. Roma are very healthy right now (well, at least for the hospital ward that is Roma) and they have their talismanic captain Francesco Totti (you may have heard of him) back and he is playing well.

Fiorentina, meanwhile…has had an up-and down season. At times it becomes tough to remember that the Viola are right now in sixth, just a few points off a CL spot, while Roma is 15th and a few more losses away from becoming irrelevant. Fiorentina had an inspiring 4-2 come-from-behind win last weekend in the league vs. Udinese, but in mid week, they were mathematically eliminated from the Champions League with a dispiriting loss to a superior Lyon team. On one hand, a few of our guys are starting to round into form (Vargas and Montolivo, the latter of whom was spectacular vs. Udinese) but the club certainly has not proved it can win a meaningful game on the road. A win on Sunday would mean so much; it would keep us right in the thick of things at the top of the table and be another nail in the coffin of Roma’s comeback hopes. But a win might be more than we can ask for; we are catching this club right as they are rounding into form we will need more than Gila getting his customary goal to get a win; we will need to have the whole team play up to its tremendous potential.

Every time I think of this I throw up in my mouth.

(Regular readers know me predicting a Fiorentina draw is like regular people predicting their club will lose 6-0.)

I will be back on Sunday night with the recap. Hope everyone is well.