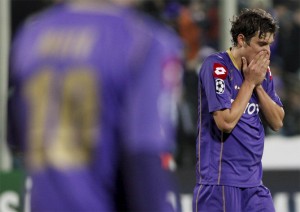 Yesterday in Florence the Viola were mathematically eliminated from advancing in the Champions League when they were defeated 2-1 by Lyon. Our boys have one more CL match left this year, vs. Steaua Bucuresti on the road in a few weeks. If they can avoid a loss, they will at least continue to play in the UEFA Cup. A loss means they are out of European play for the reminder of this year.

First of all, my apologies for not getting a preview up. I rarely miss a preview and don’t think I’ve ever missed a big game like yesterday. I’ve been sick and also trying to get a lot of work done before the Thanksgiving holiday here in the states, and just couldn’t get anything in on time.

Secondly, the game itself; I watched it last night on tape delay at my good buddy’s house, since he gets Sentanta Sports and I don’t. Obviously it was a bummer game but it didn’t feel as bad as it would have because I was watching it with good friends. Still, after the match I spent a lot of time wondering what might have been. Mostly I wondered what might have happened if we were able to somehow hold onto that 2-0 lead in our first match in Lyon. With three points under our belt this might have played out very differently. Alas we blew that lead and, as of yet, have still not won a game and have three points from five games. Playing Steaua in Bucharest will be no cakewalk, so we still have some work left to do if we at least want to continue playing in Europe.

Here are a few thoughts from the game and the fallout:

• Word is that Fiorentina’s bigwigs will be holding “crisis talks” over the next few days, and that these talks will include the Great Man. I wish this whole Champions League thing had gone better, but I don’t feel that the club is in crisis and I don’t want Prandelli to feel like his job is in danger, because I don’t feel that it should be.

• I don’t know if I ever saw a game where so many shots hit the woodwork than last night. Could have been three or four goals on each side.

• I don’t know if we need to make any huge signings over the winter window, but I think one of the lessons we can draw from this CL campaign is that you need two rock-solid centerbacks to compete at the European level, and we don’t have that right now.

• Even with the loss I liked the team’s effort and attacking spirit last night. I was cheered to see a team of strikers on the pitch for the last fifteen minutes; even if it became obvious things weren’t going to go our way. We have a lot of big ifs to figure out, but IF we qualify for CL next year, and IF we keep our key guys, and IF we keep Prandelli, and IF we make a few more intelligent additions than I think we could really be dangerous next year.

Okay, that’s it. I hope everybody keeps their chins up. As the Great Man said, we have nothing to be embarrassed about. We have a big, big game in the Eternal City this weekend and Steaua to look forward to in a few weeks, which will hopefully perpetuate our European fun.

Happy Thanksgiving to all you Americans out there. Best wishes to everyone else. I’ll be back soon with the Roma preview.