Share All sharing options for: I Didn’t See That Coming: Fiorentina – Udinese Recap 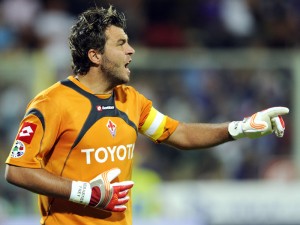 I predicted a thriller in my preview of Saturday’s game, but I didn’t quite see this coming, especially after Fiorentina went down 1-0 and went into the break looking uninspired, tired, and unable to come up with any answers to Udinese’s questions. The second half turned out to be a very different story, however, as Fiorentina scored 4, and despite giving up a ridiculous penalty (see below) cruised to a 4-2 victory, announcing to all of Italy that the Viola are back in the race.

Sorry about the delay in getting a recap up. Everyone in the family, including me, got hit with a cold strait out of hell this weekend and I’ve spent most of the last few days lying on the couch. I did get to see more football this weekend than I have in a long, long time, however, (including Inter-Juve, ManU – Villa, and the Lazio and Milan matches as well as watching Fiorentina with my son) and so in that sense it was a nice time. The crippling headaches and sore throat I could probably do without, however.

Anyway, I am going to keep this brief because I still don’t feel all that well, but here are some other thoughts from this most exciting of games…

• Bassy Frey was magnificent. We could’ve (and perhaps would’ve) lost that one 5-4 without him. Some commentators are saying he was caught out on the first goal, but he makes the best reflex saves on planet earth. And presumably every other orb in our solar system.

• We saw the real Mutu last night; the one who Prandelli refused to sell to Roma. He was instrumental in the second half comeback and played a role in each goal, either by making the crucial pass or in drawing more than his share of defenders to his side. I thought his penalty was a little cheeky, but what the hell? It went in.

• Gila scored again. Yes, it was the ugliest goal of the match, but I continue to be impressed by his tenacity in front of the net. And when we get to the end of the season, we won’t remember the ugly goals, just the unreal strike rate.

• Commotto's handball wasn’t quite the most ridiculous I have ever seen; that honor goes to Paul Scholes effort in this season’s European Super Cup. (Did anyone here see that one, by the way?) Still, what was he thinking? Marred an otherwise pretty good game by him.

• What a difference Montolivo can make when he is totally on his game; he was pinging passes around the Artemio Franchi and (obviously) creating danger from deep in midfield. When he plays like he did yesterday he reminds me, as I have said in the past, of potentially a more dangerous Pirlo. If he retains close to this form for the remainder of the season, then things are looking up.

We’ve still got a hell of a week ahead of us; we have Lyon in a matter of hours, basically, and Roma next weekend. Maximum points from both would be nice, but we must beat Lyon to have any hope of staying in this Champions League thing. I will be back to address that before you know it.