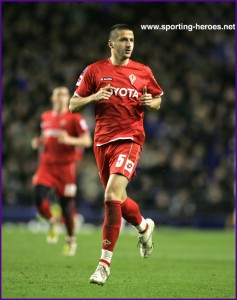 Tomorrow in Beautiful Florence two top-four hopefuls meet in what is sure to be a critical match in what is still the early part of the season. Fiorentina and Udinese have both struggled in recent weeks, (and both are coming off of dispiriting losses to lesser sides last weekend) but both would like a win tomorrow to solidify their position in the top half of the table. Udinese is an attacking, dangerous, and fun team, while the Viola are very, very tough at home. It should be a hell of a match.

This weekend marks the start of a very tough stretch for the Viola. (For Udinese news, check out Vin’s blog at the offside.) We have this match on Saturday chased by Lyon midweek and Roma next weekend. All three are (arguably) critical matches. I really want the three points this weekend to prove we are a contender and not a pretender in Series A. The Lyon game is a must-win; a loss effectively eliminates us from the Champions League. And the Roma game is particularly interesting; Totti’s boys won last week vs. their arch-rivals and might be getting their season back on track, but if we can nip them in the bud next weekend we can go a long way towards eliminating one of the main rivals for a top-four finish in Series A.

Like I said, however, this weekend won’t be easy. Late word is that Kuzmanovic won’t play, and while he’s been up and down all season he’s pretty much played every match so far. The Great Man could move Santana back into the midfield (he’s played better in the deep role than up front) or go in a different direction. I really couldn’t say for sure, and all of this is complicated by the fact that we have a critical mid-week match coming up. It will be interesting to see how much emphasis Prandelli puts on the Lyon match seeing how slim our odds look of advancing. Rumor has it Fabio Quagliarella will be out for Udinese, so at least we will not be the only team lacking key men on Saturday. With the rumored return of Adi Mutu a distinct possibility, we could have the edge in this one, particularly since we are playing in the friendly Artemio Franchi.

I like Fiorentina winning this one 3-2 in a thriller. I think we all need a thriller this weekend, and one that ends on a positive note for the Viola.

The game will be televised here in the states on FSC, on tape delay, at 4:30PM EST. It is also apparently being televised around noon (or so) on RAI, although I haven’t been able to confirm that yet. An embarrassment of riches, nonetheless.

Forza Viola, everyone. I will be back after the match with a recap.