Share All sharing options for: Siena 1 – Fiorentina 0: A Craptacular Review of a Craptacular Game 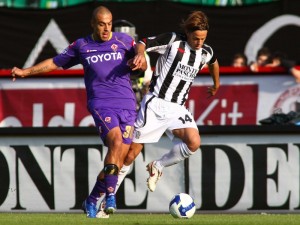 Last year before this very same fixture, Siena hosting the Viola, I wrote a preview describing how much my wife and I loved Sienna. I am aware of the historic animosity between Siena and my favorite city in the world (which goes back almost six hundred years) but I don’t care. Siena is a beautiful city with nice people; my wife and I spent a lovely and very memorable day there once I thought I shall always have a very special place for the city in my heart.

Well, up until today, anyway. Fuck Siena. That football team is driving me crazy. After I wrote my stupid preview last season the boys in those hideous black-and-white stripes won 1-0; they did the same thing today, beating Viola with a late goal while keeping a clean sheet on their own end.

This was the second game of Gila’s two-match suspension for his handball in Palermo; by no mean coincidence, it was also the second game in a row where the Viola didn’t score a goal. This is a deeply worrisome trend, as Gila could surely become injured at any moment. To be fair, Siena’s defense played pretty well, helped by the fact that they kept an extra man back most of the match. (I thought they played better defense than Jose’s Inter did at midweek, in fact.) Siena played very cautiously while on the attack, but brought on Mario Frick to great effect in the second half. Fiorentina, meanwhile seemed to wilt as the game went on, and ultimately left their neighbors facing a second strait 1-0 defeat.

Here are a few additional thoughts from the game:

• I liked Frey, Pasqual, and Donadel today. They had good games. I liked Mutu gutting out the 65 minutes with a bad knee. And every time Jovetic comes off the bench it is like Christmas morning for me.

• I was not so crazy about Koldrup and Melo (the latter of whom was “deathly quiet” today, to quote Kenny Rodgers.) And Almiron is just KILLING me. I obviously understand that the Great Man knows much, much more about football than I do. But what the hell does he see in him?

• Santana put in exactly the kind of mature, “steady hand” performance the club needed on Wednesday, and so I think he deserved the start today. But I also don’t think he did much with it. He had one great cross around the 65th minute (sorry, I wasn’t taking notes this time) but otherwise it was much of the same story; good play in the open field but significant trouble with the shot or final pass. Should he perhaps be playing deeper?

• Everyone knows I like Pazzini. I really, really do. But I think he is going to look back on these two matches and rue what happened. Perhaps they will ultimately be the turning point of his career. We needed someone to finish for us, and he simply could not get the job done. I have no idea how he will turn out in the future. He could turn into a 15 goal scorer, or could be loaned out to a series of clubs before disappearing from the scene. I have no idea.

• I will report the news on Comotto’s injury as soon as I hear anything definitive. That might take a few days. Fake news (like Mutu have knee surgery this week) is a dime a dozen. The real stuff is hard to find.

• Good job by RAI in televising the game here in the States. My relationship with RAI defines the term “love/hate” but I don’t know what I’d do without them.

• Whenever I visit a city, I always try to buy a football shirt from the local team as a souvenir. I got a cool Siena ‘keeper’s shirt a few years ago on that aforementioned visit. I am thinking of burning the fucking thing.

Anyway, now that we’re past Siena, I’m sure things will ease up a bit, and, uh….shit. We have Bayern on Wednesday. Great. At least Gila will be back. We’ve all talked about the Champions League ad nauseum, and Wednesday’s game is shaping up to be a must-win if Fiorentina are to advance to the group stage. Frankly, Sunday’s home game vs. Atalanta is also shaping up to be must-win after today’s disheartening loss. So no pressure then. Just win Wednesday, then win Sunday, and I will be happy as a clam again.

I will be back on Tuesday with a preview of the big, big Bayern match. Hope you are all well, and remember to keep your heads up until then. We shall emerge victorious.