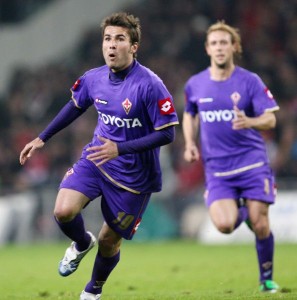 Since we are about 1/3 of the way through the season, and also because we are experiencing a rare week where the club isn’t playing a mid-week match, I thought I would take the opportunity to see where we stand as a team.

Now of course there are lots of ways to do this; the most simple is to look at the standings, and see that we are in 9th place in Series A and are about to be bounced from the Champions League. In that sense it has not been very satisfying season, and I think you will see that reflected below. But I wanted to take a look at how each of the players were doing individually, so I thought I would use a gimmicky school-grade type format to share my thoughts on everybody. I’m sure virtually everybody will disagree with me (this sort of thing always lends itself to healthy debate) so leave your thoughts below.

Also, I want everybody to keep their chins up. We’re still less than halfway through the season, potentially have an exciting UEFA Cup run in us, and hell, we could still qualify for the group stages of the Champions League. Stranger things have happened.

One quick note on the grades; as you will see, I did not grade everybody, just the folks who got significant playing time so far this year. If they’re not listed, you can assume I’m giving them an incomplete. Okay, onto the grades….

Bassy Frey: The best goalkeeper in Italy. Should be the keeper for the French national team. Should be on FourFourTwo’s “Best 100 Players in the World” list that came out this month. The man who keeps us in every game whether we are playing Catania or a World XI. Grade: A+

Gianluca Comotto: If I told you at the beginning of the season that one of our best signings would be a feisty fullback who is solid on the ball, likes to go forward, and can have a real influence on the match, you would have said Vargas, right? But Comotto has been one of the bargains of the season; I’m delighted with him. Grade: B+

Dario Dainelli: A serviceable second centerback. There have been moments where I have openly pinned for Ujfalusi. I like his work on set-pieces more than from open play. Grade: C+

Alessandro Gamberini: Usually a rock, but as a full international I think we can expect more from him. He’s tough and committed, and he’s a guy who we can build our defense around for the next three years, but he has disturbing moments where he loses his focus. The fewer and further they are in between, the better we will be. Still a core guy for our team, regardless. Grade: B

Per Kroldrup: Fine as a back up, fill-in guy. Worrisome if we are counting on him in the Champions League. Grade: C.

Manuel Pasqual: rumored to be on the way out. We’ll see. I think he can help this team, but it depends on how far he’s fallen in the depth chart. Grade: Incomplete.

Juan Vargas: I think he still has it in him to be a very, very good player, and we have seen glimpses. When he goes forward, he can really create havoc, and I think he works hard on defense. Still, we have to give these grades on what a man has done, not what he can do. However, I think this grade could be significantly higher come the end of the season. Grade: D-.

Luciano Zauri: A fill-in player. Not a starter on a Champions League-caliber team. Grade: C.

Sergio Almiron: He played well on Sunday but has otherwise been just dreadful. Maybe that is all he can give us: twenty minute stretches where he plays OK. Not what we thought we were buying. Grade: F.

Marco Donadel: Who is our starting central holding midfielder? Marco or Felipe? Felipe seems to have a much higher ceiling, but Donadel hangs in there with smart play and the occasionally blistering shot. Still, he has certainly not shown off the Melo challenge. Marco may not be the man in the long run. Grade: B-.

Zdravko Kuzmanovic: One goal from 14 appearances in all competitions, and a bunch of very quiet stretches where he didn’t do much. Along with Monto, Kuz must improve and get more consistent. The Arsenal rumors aren’t quite as frequent as they were last year, for a reason. Has the potential to be very, very good. Grade: C.

Felipe Melo: Unlimited potential, but hindered by a massive temper and a tendency to drift out of games. With the talent he has should be an automatic first choice for the Great Man by now, but Donadel is hanging in there. I think that’s saying something. Grade: C+.

Riccardo Montolivo: Is there anyone on the team with more talent? For a stretch during Sunday’s game he was the best player on the pitch by a mile. Is good enough to be the next Pirlo, if not better, but must get more consistent. We need a season’s worth of Sunday’s performances if we are going to do anything this season. Grade: C+

Mario Santana: I have this well-known thing with Santana, so I don’t want to pick on him too much. It’s just that he’s very good on eighty percent of the pitch but simply cannot finish, whether it is that last pass or a well-taken shot. I think he has to take a lot of the blame for the club’s scoring woes, and I implore the Great Man to try something else. I never, NEVER criticize Prandelli, but I think he may have stuck with him too long. Grade: D-.

Alberto Gilardino: He’s started 13 games in all competitions and has scored 10. Let’s just move on. Signing of the season, obviously. Grade: A+.

My Precious Stevan Jovetic: Still just a kid, obviously, but one that has shown breathtaking flashes of genius. Actually made me scurry out and buy a Jovetic shirt. Still, he’s difficult to grade: he’s a young kid thrust into the middle of this, and there are moments where he disappears. Let’s just see where he is in two years. For now: Grade: B+.

Pablo Daniel Osvaldo: People are quick to criticize him, but he just hasn’t played enough. I won’t give a grade yet. Grade: Incomplete.

Giampaolo Pazzini: It’s been a terrible season for my man; out of luck and low on confidence. Maybe a loan move would do him good, but I still think we need SOMEBODY to score besides Gila, so we should keep him around to see if things turn. Grade: D.

Okay. That’s it. Please post your thoughts, complaints, and respectful (hopefully) disagreements below. And keep the faith. I’m hoping all the boys get A’s by the end of the term.