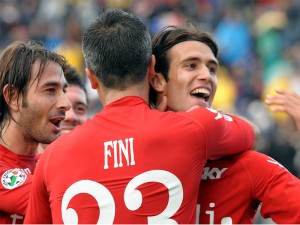 Yesterday in Cagliari the Viola lost 1-0, a frankly depressing result for a club that really needed the win. Cagliari played pretty well, and their ‘keeper Marchetti was great, but Fiorentina could very well have drawn and potentially even won that match. I believe we are going to look back on this one as a terrible missed opportunity come the end of the season.

I sat down with my five-month old to watch the game on the computer. We missed big chunks of the first half due to streaming issues, but caught almost the entire second half. My son, who is still only a baby, watches a few seconds of games here and there but mostly plays with a stuffed dog in my lap while I watch the game. At one point we lost the stream for four or five minutes, and while I was trying to fix it my son blithely kept on playing with his stuffed toy. However, for about a 30-second period he got uncharacteristically mad, threw the stuffed toy down and started slamming his palm on the desk. I wondered what bothered him so much. A few moments later I realized his mini-tantrum had occurred almost the same moment that the Viola gave up that supposedly sketchy penalty that won Cagliari the game. ( I never really saw it.) So now I think my son my have some physic connection to Bassy Frey or maybe the team in general. So I do have that going for me, which is kind of cool.

Here are a few thoughts from the game, presented in my usual frenetic style.

• We obviously missed Mutu yesterday. We had no one who could create their own shot in front of the net, and no one who could finish with the same authority he does when he is on and dangerous. We can’t count on Gila to do it everytime. My precious Jovetic had his moments but was also invisible for long stretches, which is understandable since he is still just a kid.

• We saw the real Montolivo yesterday. The one who people use the term “full international” to describe. Nice to have you back, pal. It’s been awhile.

• Credit where credit is due: they have been getting a lot of stick this year, and deservedly so, but Vargas had another strong game and Almiron (yes, him) impressed off the bench. This doesn’t mean I want Telly Savalas starting, but if he can come on as a sub and play like that he can help us.

• Actually, when you think about it, Monto, Vargas, Almiron, Melo, and Frey all had what I would call good days, and yet they still lost. Which points to the fact that…

• Our finishing must improve. Yes, Mutu’s absence hurts, and Jovetic is still a kid, and Santana has been really quiet in front of goal all season. But something has to give. Obviously this is going to be one of those seasons’s where Mutu is hurt a lot, and Gila, as I said, simply cannot score every single time he is fed the ball. Someone in the group of Jovetic-Pazzini-Santana-Montolivo-Kuzamanovic needs to step up very, very soon. As in, next week soon, since we have Udinese, Lyon, and Roma next on the docket.

I think it is best to just to shake this one off and move on. Not much we can do about it now anyway.

I am going to be back tomorrow or Wednesday with a little look at the team and where we sit after (roughly) a third of the season. Right now, I don’t feel like I’m going to be handing out a lot of high marks.