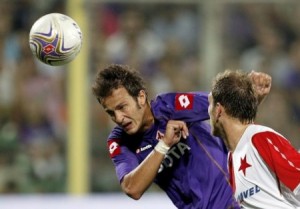 This weekend in Cagliari Bob Freshwater and the boys take on the Viola. Cagliari has looked pretty good in recent weeks, despite last weekend’s tough loss to Catania, while the Viola won at home last Sunday in a match that went unwatched in this house due to technical difficulties. Anyway, Fiorentina is probably the better club, but Cagliari is tough at home, so it should be a pretty good match.

Sorry I’ve been AWOL all week. My real job (the one that actually pays me for my services) was a grind all week. But I’ve been looking forward to Sunday. With the CL and all, it seems as if the boys have been playing every three days or so, but I haven’t seen them in almost two weeks. I wonder if Marco Donadel still looks like an escapee from clown college?

The other reason I didn’t write much is just because of my well-known “zero-tolerance” rule for ridiculous transfer rumors, especially when it is still early November. We saw a lot of those this week. Frankly, I don’t think the club is going to sell/loan Pazzini AND Osvaldo. Just a hunch.

So what about Sunday? Adi Mutu looks to be out with his 39th injury of the year, but word is that the Great Man gets Vargas back and will start him. We’ll see. Word on the street (er, the Internet, rather) is that my precious Jovetic will start for Mutu. Daddy Likey. Otherwise I’m guessing a pretty standard lineup for the boys. (For the lowdown on Cagliari, check out Jeremy’s Cagliari Offside page. Jeremy, happily, is picking Fiorentina to win the match. I like that boy’s style. Jeremy’s Spoken, as Eddie Vedder might say.)

I like another big win on the road this weekend, just like Palermo a few weeks ago, only without the Gila handball.

Right now the match is not scheduled to be televised here in the States. (sighs audibly.)

Hope you have a good weekend, everybody. I will be back on Sunday night after the win! Forza Viola!