Viola Win, and News and Notes

Share All sharing options for: Viola Win, and News and Notes 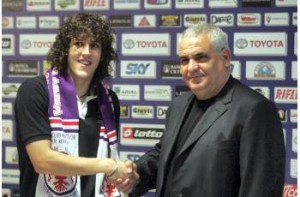 Yesterday in beautiful Florence the Viola defeated Atalanta 2-1, keeping pace with most of the big boys in this year’s highly competitive edition of Series A.

I was up early and ready to watch the game, but never saw the match. It was not televised here in the states and it seemed impossible to find a decent stream. I ended up watching Inter on RAI, where at least they cut away to show each of the goals in the Fiorentina match. I was nervous after Atalanta pulled one back in the final minutes, but kudos to the boys for getting three points when they needed to. I don’t want to say too much about the match, having not seen it and all, but by all accounts the team played well and looked solid from back to front. Felipe Melo had a sweet run which led to the first goal, and the young man who is now Officially My Favorite Fiorentina Player (see picture, and not the fat guy on the right) crossed the ball nicely after a sneaky run to Gila, who got the second to continue his absurd scoring spree. (Could Gila get 25 in all competitions this year? Do I hear 30?)

Here are a few other thoughts from the weekend:

• Has this been the most crazily competitive year in Series A recent memory, or what? At the begin of the season I thought that if one of the big four (out of Inter, Milan, Roma, and Juve) slipped up, we would get a CL spot, just as we did last year. Now it seems as if there are ten or eleven teams that could wind up in the top four. It’s worrisome as a Viola fan but great as a follower of Italian football. And beats the shit out of the same top four in the Premiership year in, year out.

• Speaking of which, we have another (theoretically) winnable match next weekend vs. Cagliari, but chase it with a very frightening match vs. Udinese. I don’t like the looks of that one right now, even after their recent tough loss to Inter.

• Interesting article here on how Bassy Frey continues to be pissed about not being picked for the French national team. And he’s right, of course. Is there a bigger inexplicable omission in any national team anywhere than Frey not being a part of the French set-up? Baffling, at least until you remember who is running the French camp.

• Speaking of Bassy, I did not know he was a practicing Buddhist, and that he was turned onto it by the great Roberto Baggio. Huh.

• As I said earlier, Steven Jovetic is my new favorite football in the world. And yes, I did bite the bullet and order the shirt. But Christ, Steven, take it easy with comments like this. I hope he was smiling when he said it.

• This last link makes me very, very nervous. The Great Man says it is “difficult” to coach in Florence. Shit. Other than the health of my family, my biggest worry is probably Prands leaving Fiorentina. Please stop saying stuff like this, my hero.

Okay, that’s it for now. I hope you are all good and had a fun weekend, which you presumably did after the win. I will be back soon with more Viola news. And hopefully a bit more good news, as this Prandelli stuff is giving me a stomach-ache.