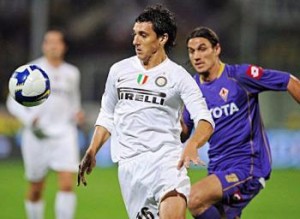 Yesterday in Florence our Fiorentina held Inter to a nil draw with the Viola’s top two strikers and scoring threats on the bench. Although I would have loved a win (and one was certainly within reach) I’ll take the point and look towards Siena on Sunday.

I don’t have a ton of time today, so I plan on keeping this fairly brief. Overall, I liked very much how the team looked; I think they played very well, and very intelligently, against a very strong club. Obviously the Great Man saw something on tape in his preparations for the match, and the Viola cam out with a clear mandate to attack down the flanks (particularly the right) and cross the ball in the box to the waiting Pazzini and Osvaldo. Pazz in particular ran and hustled all night (he also did a lot of complaining about fouls) and got his head on a remarkable number of balls. Unfortunately, he couldn’t finish, and neither could Osvaldo, although the latter improved mightily in the second half.

If I was giving out grades, I would give both starting full backs (Comotto and Pasqual) A+; they started virtually every attack, distributed smartly, and hustled mightily to contribute on defense. This is what we imagined we’d get, I suppose, from Vargas. Nods of appreciation are also due to Gamberini and Kroldrup, who kept a clean sheep in front of the always great Bassy Frey. And make no mistake, Inter has its share of injuries but is still a potent team, and Fiorentina should be given credit for shutting them down.

Melo was fine in the midfield, even if he got a bit more forward at times than I would prefer. Kuz, in my mind, was the man of the match in the first half and was responsible for many of the best crosses into the box. I found Monto to be disappointingly quiet.

I get on Santana all the time (and was genuinely excited when Jovetic got on the field) but Mario was exactly what the team needed yesterday; he was a calm and collected force on the ball keeping cool for all the kids around him. He played more in the center of the park then he usually does and I liked him there.

So, all in all, it was a good draw by the boys. I don’t think it’s out of line to imagine we might have gotten the three points with Gila and Mutu on the pitch. It’s a distinct possibility they would have finished one of those crosses. Too bad Gila, at least, didn’t play. But hey: if there’s one thing I respect, it’s the governing body of Series A, for all of their common sense and fairness. For instance, Ibrahimovic had an obvious handball yesterday, and he then denied it to the referee. Inter fans might argue that the handball was unintentional, but I looked into the man’s eyes and saw his cheating heart. I’m sure the league’s disciplinarians did as well, and thus I await Ibra’s two-game suspension with baited breath.

I’ve got a crazy weekend coming up with a birthday, a wedding, taking my son out for Halloween, and a bunch of other family stuff. I may not be able to get a preview of the Siena game up before the match, and may in fact actually miss seeing the game (sob) which would be my first of the year. I will be back at some point with something this weekend, and hope you all are well until we talk again.