Share All sharing options for: Inter Preview and a Few Gila Thoughts 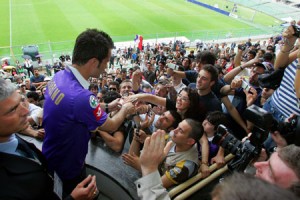 The games continue to come fast and furious for the Viola. Tomorrow in beautiful Florence the boys take on league-leading Inter in what is sure to be an interesting match. A win, or even a draw, would signal to the rest of Europe that Fiorentina are ready to be considered one of the big boys.

Both clubs come into the match with some interesting challenges to face. The Viola are relatively healthy and are coming off four league wins in a row, but will be without prolific striker Alberto Gilardino, an issue I will address briefly below. Inter, meanwhile, are coming off a disappointing draw with Genoa which left Inter bigwig Jose Mourinho sputtering with rage at every other human being on God’s Green Earth. So presumably everyone in the blue and black will be fired up and looking to get out of his doghouse.

For Fiorentina, fixing their issues is fairly simple; Pazzini, presumably, will step in for Gila. If he can threaten the goal in even remotely the same fashion that Gila has been able to do all season, we should have quite a game on our hands. Inter’s menacing front line should provide ample challenge for Fiorentina’s sometimes-shaky defense, and a midfield of Monto-Kuz-Melo might just be able to play Inter’s much more famous and well-compensated, but also more beat-up midfield, to a stalemate. I think we will see Santana up front with Mutu and Pazz, to add a little more experience and stability with Gila’s absence, and thus on Wednesday we will see two very good clubs going head-to-head.

Fiorentina 2 – Inter 1. And keep in mind I’ve started to become halfway decent with my predictions lately.

The game will be televised live on RAI at 2:30pm here in the states on Wednesday. It will also be shown on tape on FSC the next day, if you feel like waiting that long.

I also wanted to get a few thoughts down about Gila before I ended the post. As you all surely know, he has been banned for two games for his handball in Palermo. I don’t really have a huge problem with this. He broke the rules, blah, blah, blah. It’s not the end of the world.

Two things have struck me, however. The first is that ABSOLUTLE certainty with which everyone is writing about how it was a deliberate handball. This includes people on this discussion board who are Viola fans. Look, when you look at the play in super slow-motion five or ten times, it looks deliberate. I understand that. But keep in mind the play happened in a fraction of a second, as Gila was falling down, and in fact was being pulled down from behind by a defender. The only person who knows whether it was deliberate or not is Gila; and he in fact said it was not deliberate. I certainly don’t know and don’t claim to know what happened in Alberto’s mind, but I just find it surprising that so many other people do.

Secondly, I just wanted to suggest that a little bit of the vitriol against Gila is a bit misplaced. I know he is not a popular guy outside of Florence, but reading comments in all of these other forums sniffing about he is a cheater and got what he deserves strikes me as childish and naïve about the game of football. Whether the handball was deliberate or not (and we really don’t know) I refuse to think of Gila as an evil man out to destroy the Corinthian spirit of football. He’s just another guy out to win football games, just like every other player.

The situation raises one final interesting question. Does this mean that every handball will now lead to a two-game suspension? Because it should. Whether the handball was intentional or now, and whether or not a goal was scored as a result, it is clear that Gila was given the penalty for striking the ball with his hand. It shall be interesting to see if every player called for a handball is given the same penalty in Italy going forward.

I will be back Wednesday night or Thursday morning with the Inter recap.