Palermo 1 – Fiorentina 3: The Hand of Gila

Share All sharing options for: Palermo 1 – Fiorentina 3: The Hand of Gila 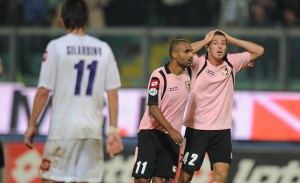 Not only is the title of the post a lame pun, but it was used by goal.com before I was able to get it down on paper. For family reasons I recorded the game and didn’t watch it until about four hours after the match had been played. Thus, by the time the game was over, all of the reports had been filed, and I am left looking like a plagiarist. I assure you I did come up with “The Hand of Gila” during the match, even if it is a bit obvious. (Channel Four had “Gila Hands Fiorentina Win” which sounds like something Dr. Evil might say with his pinky finger on his lips.)

Anyway, the big talking point will be Gila’s handball, which opened up the scoring. And yes, if anyone is looking for the Viola fan’s perspective, I do of course admit it was a handball, just as Gila and the Great Man did after the match. But I also buy Gila’s excuse that he was pushed in the back and was falling down and did it unintentionally. I also am willing to buy that the shove was probably a penalty, even if it likely would not have been called. Anyway, these things even out over the season, as we all know. Little consolation for the Palermo fan, but it feels pretty good to root for Fiorentina right now.

Since my son went to bed before I watched the match, I was able to watch the game the old-school way and took about three pages of notes detailing the action. But honestly, over the last few weeks I have grown to like the format of bullet points marking my broader thoughts about the game, and so I am going to continue to use it here. Those looking for a more traditional match recap that simply describes the action have a number of good sites to go to that don’t need to be listed here.

• Aside from the handball Gila played very well today. His pass to Adi for the second goal was sublime, and he created a sense of danger every time he was in the box. In spite of the controversy he is now the leading scorer in Series A and has scored more goals than he did all of last season. He’s easily the buy of the summer in Italy.

• Mutu was great today, the man of the match, as he both crossed and scored with seeming ease. That is the Mutu that Roma wanted this summer and in fact so desperately needs now. Much has been made of his propensity to act like a prima-dona and his supposed “jealousy” of Gila, but they seem to be connecting as if they have been playing together for years. Between them they could have had three more goals.

• Longtime readers know of my thoughts on Santana, and my much more recent wish is to see Jovetic play in every game. Mario played well today, I admit; however, I was struck by the fact that his game is sometimes nearly perfect excepting the all-important final ball; whether it is a shot or a pass, that is where his talent seems to fail him. That’s what I noticed again today. He deserves credit for his important role in a big win, but I am still backing the kid to take his job.

• Donadel played in place of Melo today, and for much of the game was superb. However, he had two bad giveaways (one in particular in the 27th) that almost lead to a goal. If he hadn’t been saved by the defense, no one would remember his solid play and only the terrible mistakes. He needs to be more careful distributing the ball in those tight situations.

• On the whole the defense played well. They continue to have trouble with sidepieces, and I wish Gamberini had stayed closer to home on the lone goal the Viola conceded. But Palermo is a good team and, on the whole, they played well, even after Kroldrup came on for an injured Dainelli. And, as the announcer on FSC kept saying, Vargas played his defensive role very well this evening. Perhaps after his shocker last week he’ll now begin to come around. Perhaps he was inspired by his old derby opponents. I don’t know, but I like what I saw.

• Bassy is the best goalkeeper in Italy. I have said it many times and I’m just saying it again. Here’s tonight’s evidence. Towards the end of the match (I didn’t write down the time but it was around the 85th minute or so) a tricky cross was lobbed into the box, the kind that always causes ‘keepers problems. Bassy punched it out weekly, which led to another goal-scoring opportunity. I think he should have caught the ball, and could have done so. In other words, I think Bassy made a mistake. And it just shocked me. Shocked me. When you are looking slack-jawed in amazement because your ‘keeper has actually made a minor error, you know you have a pretty good goalkeeper.

Anyway, we have now won four on the trot in Series A, and sit a point out of first in the league. I am starting to feel pretty good about this team. And of course I know Inter is coming to town this week. You know what? Bring ‘em on! We’ve got to play them sometime, and I don’t care if Jose threw a hissy fit today because his boys played to a goalless draw. Bring ‘em on. Bring on Inter. We are Fiorentina, and we are waiting.