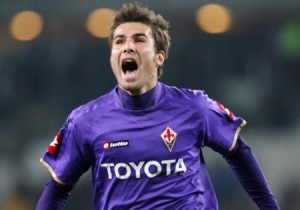 On Sunday evening the Viola travel down south to play Palermo in a critical Series A matchup between two teams with big ambitions this year. Both clubs are coming off dispiriting losses (Fiorentina was spanked by Bayern midweek while Palermo was taken to task by archrivals Catania, the latter of which led to Palermo President and resident whackjob Maurizio Zamparini to go, as they say, cuckoo for cocopuffs) and thus both would really, really like three points this week to get things back on track.

Aside from the Bayern ass-kicking, however, it has been a decent-enough stretch for the Viola. They have won three in a row in the league and look to have the injured Adrian Mutu (who did play midweek) for the weekend. Gila has been in scintillating form in the league, and excitement grows for the Jovetic era every time the kid touches the ball. The defense has come in for significantly more criticism this season, but the club has kept a solid defensive record over the last few weeks in the league.

After three games against lower-tier opponents, however, Fiorentina now enters a tougher stretch where they play Palermo on the road followed by Jose Mourinho’s Inter back in Florence. Many a club has traveled to Sicily confident of gaining three points and has come back empty-handed. I have no illusions that Sunday will be an easy match.

(By the way, for the Palermo-sided preview of the match, I strongly recommend you check out Steven’s preview. And I don’t care if its profoundly negative about the Viola: good writing is good writing, and with lines like “Mutu sucks more than those Romanian hookers behind the Roma Termini-station” , “Frey is fat, greasy and has sideburns” , and “We both want CL-football, we attract 20-30.000 fans, we play in a color that no one else wanted to play in and we’re both fighting the big boys” , that’s good writing. Well done by Steven.)

So what do I think I’ll see on Sunday afternoon, or perhaps at least hope I’ll see? I would like to see Gila up front of course, and I’d love to see him combine with Mutu and Jovetic. (The latter of who only played a few minutes on Tuesday.) I’d like to see Monto and Kuz again in midfield, with Melo again playing the stopper role in front of the back. For the back four I’d like to see Comotto, Dainelli, and Gamberini along with, yes, Vargas. I know he’s been getting a lot of stick lately, but I still believe he can come good, and I am excited by the potential he brings to the attack. I’m willing to write off his early-season struggles as adjustments to a new team, and want to see him work out. So I hope he is in there Sunday.

I say Fiorentina wins 3-2 in a thriller. After all, we have to beat a decent team on the road at some point. Right guys? Right?!? (Sounds of birds chirping in the background…)

The game will be televised here in the States at 3PM on FSC. Sweet.

I’ll be back probably Sunday night with the recap. Hope everybody is well. Forza Viola!