Bayern Munich 3 – Fiorentina 0: We’re On Life Support, And the Plug May Soon Be Pulled

Share All sharing options for: Bayern Munich 3 – Fiorentina 0: We’re On Life Support, And the Plug May Soon Be Pulled 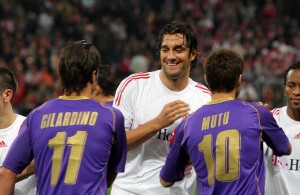 Today in Munich a very different (and much more successful, I suppose) Beer Hall Putsch took place as Bayern Munich stomped my beloved Fiorentina 3-0. It makes little difference that Fiorentina played better than the score indicated (especially in the first half); they did not defend well and couldn’t finish in front of the net. If you can’t do those two things, you simply won’t win a lot of games.

I missed the first eight minutes or so of the match, and my second half was a bit spotty as my young son woke up from his nap, so I certainly did not see every kick of the game. Essentially, Bayern jumped out to an early lead on a Klose goal in the 4th minute; I didn’t see it, but there are some mumblings it may have been offside. Whatever. The key moment of the match may have happened a few minutes later when Felipe Melo crafted a mazy run through the defense to get in the box with only the goalkeeper to beat and Mutu wide open on his left in front of an open net. Melo neither passed the ball to Mutu nor placed a difficult shot past the ‘keeper, instead shooting weakly. If we had tied the match perhaps momentum would have led things to play out differently, but instead Schweinsteiger scored for Munich in the 25th, and thus the hill was too high for the Viola to climb. (Bayern scored again in the 90th.) To their credit Fiorentina continued to attack the whole game (although much of it petered out in the second half) and Mutu and Gila both had excellent chances that came out wanting. I can’t fault either of them up front (although I remain unimpressed with Santana and wish Jovetic would get more minutes in spite of his youth) and Monto and Kuz were okay in midfield and certainly not shy about trying the longer-range shot. I actually thought Melo did OK as the midfield stopper and distributed the ball well, but the defense simply did not cut it today. Much of the blame was shouldered by Vargas, so much so that after the game the Great Man had to remind the press that he still envisioned Vargas a “full back” (meaning that he was an important part of the offense) and yet he still conceded that the boy’s defense needs to improve mightily. Like Prandelli, I for one don’t really feel like labeling Vargas or anyone as the goat today. We just didn’t cut it vs. a world class team, in spite of the fact that we were in fine league form and they were struggling. If we don’t defend well, and don’t finish, we will not win a game in the Champions League.

Yesterday I was thumbing through World Soccer and was started when I read that Fiorentina was the fourth highest-spending club in the world this summer. In the World! We spent more than a bunch of big, big teams. What have we gotten for that money? In an individual sense, it looks like we spent wisely; Gila has been a great buy, Jovetic looks like a diamond, everyone is generally happy with Melo, etc. Vargas has disappointed many but I do feel he will come around.

But it the team sense the money seems to have bought us less. It seems now that Fiorentina can beat the teams it is “supposed” to beat (like Genoa and Chievo) which is no mean feat given the quality of Series A. But Fiorentina is having a great deal of trouble with the better teams. We have been spanked by Bayern, Lazio, and Napoli, and have had draws with Juve and Steaua (at home) as well as Lyon. These kind of results generally mean we will be fine in the league (we could conceivably finish anywhere from 3rd to 9th, depending on the breaks) but it means we won’t have a shot in Europe where all of the competition is true quality. This is what most needs to change. We have a good team with good players and a good coach that knows how to win. But we’ve got to start beating the good teams.

The table now looks like this: Bayern has seven points, Lyon has five, the Viola are on two and Steaua has one. In the final three matchdays of the group stage we have Bayern at home, Steaua on the road and Lyon at home. Obviously we need points from all three, and probably need outright wins from the last two matches. Right now it looks like a tall order. I want to stay in the CL; I don’t want to go back to the UEFA Cup. But to stay in we must now prove we can beat a big team in a big situation, and we will get our next chance in a few weeks when we play Bayern again in beautiful Florence. Let’s hope they turn the Artemio Franchi into a fortress, and show the world that all that money was well spent