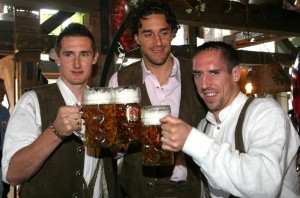 My apologies to all, but I won’t be able to get a proper preview up of tomorrow’s big game. I have to work late yet again (thanks for the collapse of the world economy, fellas) and just don’t have the time to put up some original writing. I love that the boys are in the Champions League, but some of these Tuesday matches are a bit trying for a blogger. Rest assured, however, that I am as excited for the game as any of you and will (hopefully) get a good recap of the match up on the site a few hours after the final whistle.

In the meantime, I wanted to get at least something up here so our fans would have a place to post their comments after Fiorentina takes the lead. So here are a few links to get you fired up for the match…

Here are a couple of articles on the Great Man’s thoughts before the big match (which he calls the “biggest of his career.” They can be found here and here.

Finally, here is a serviceable preview of the match that will hopefully, in some small way, make up for my many faults.

Oh, and it wouldn’t be a preview column if I didn’t offer up an over-optimistic prediction. So I say the Viola win 1-0 on the road in Germany. If I had a sense of humor I would predict a Toni own-goal, but I would be perfectly satisfied by a bit of Mutu free-kick magic or a Gila header off a corner.

Thanks everybody, and sorry again about how busy I am. I will be back after the match. Wherever you are, try to get to a TV or computer to watch the game, and Forza Viola!